Comfort, Humility, And Other Things I Found in My Man Pants

"God bless you, baby" is a catcall I hear nearly every day. But on this day, I didn't expect to be blessed—I was wearing man pants.

Share All sharing options for: Comfort, Humility, And Other Things I Found in My Man Pants

God bless you, baby" is a catcall I hear nearly every day leaving my apartment. It's a background noise I've grown used to in the two years I've lived in upper-upper-uptown Manhattan. But on that day, I didn't expect to be blessed. Because on that day, I was wearing man pants. The pants in question were 501 jeans purchased from the Levi's men's section, which is where they keep the man things, and though I know in my heart of hearts that being hollered at has nothing to do with what I wear, I was one elastic waistband away from impersonating a giant toddler on a playdate. I felt changed. I thought everyone else could see it, too.

I reached this exact moment of disconnect thanks to a trend that started in 2011, when skinny jeans began their slow demise. Mainstream fashion had just discovered the word androgyny (again), Lea T and Andrej Pejic were the models of the moment (for the first time), and boys looked like girls and girls looked like boys (again).

But it wasn't until this fall that the total loosening, slackening, slouching of wardrobe basics from top to bottom (with no extra effort spent on balancing a baggy upper half with close-fitting lower half or vice versa) became unavoidable. Suddenly, it was socially acceptable to wear fancy sweatsuits at Fashion Week. Coats were losing their shoulders by the dozen. The neck just kind of sloped into the arm. Bands of elegant Quasimodos padded New York sidewalks. It couldn't be stopped.

As someone who stares at clothes all day for work, I like to think I'm more trend-resistant than the average millennial. But the prospect of jumping full-on into this slouch-fest ignited the same fire in me that's powered Forever21 since the dawn of time. It's that feeling where you sense the tide changing and you can't just meet it. You have to sprint ahead of it, doing a victory dance that would get you kicked out of the NFL along the way. "Y'all got 'boyfriend jeans?' WELL I'M LITERALLY WEARING PANTS INTENDED FOR A MAN." Twerk, twerk, wobble wobble, spike my wallet, accept red card or whatever they give out in football for being an asshole. 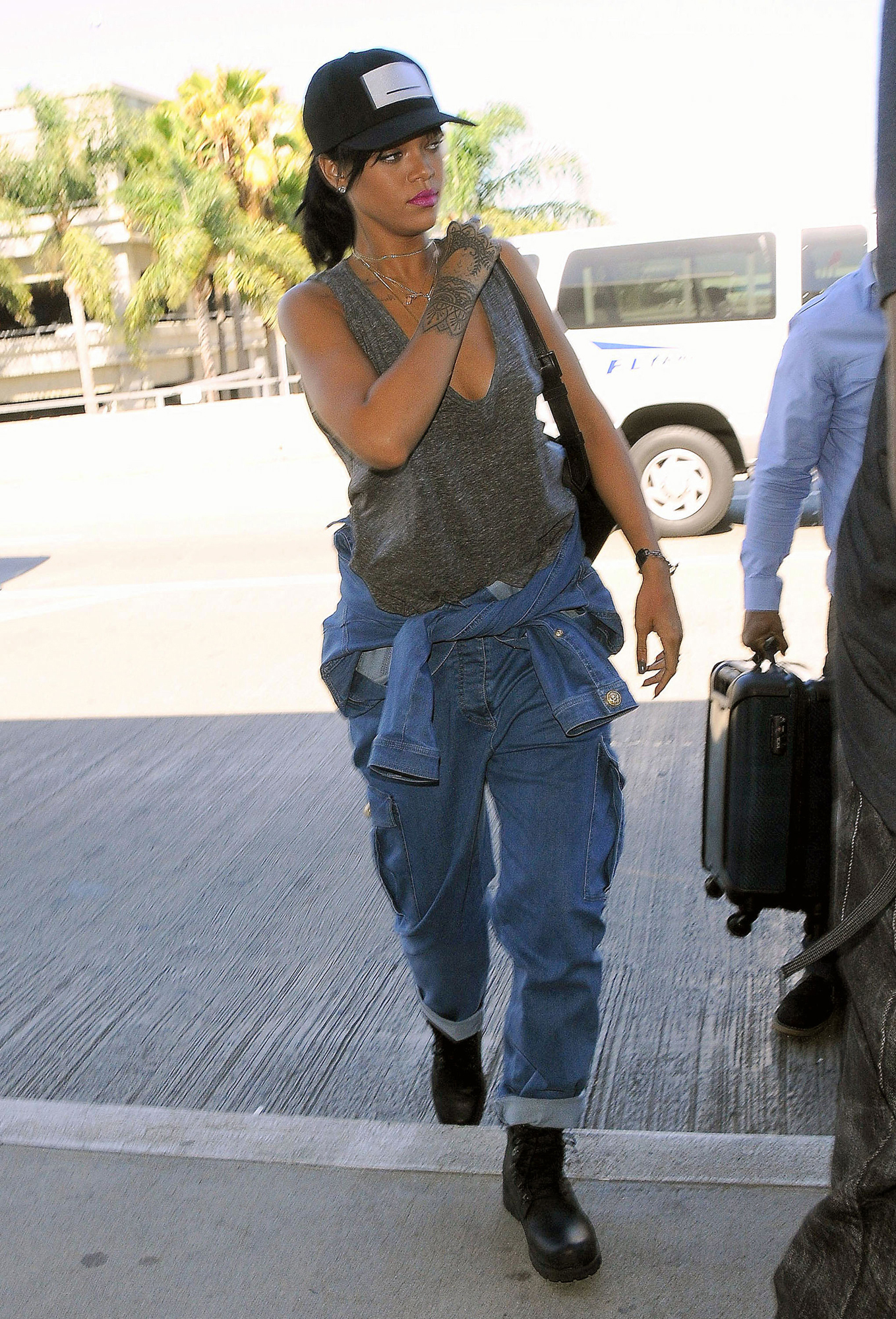 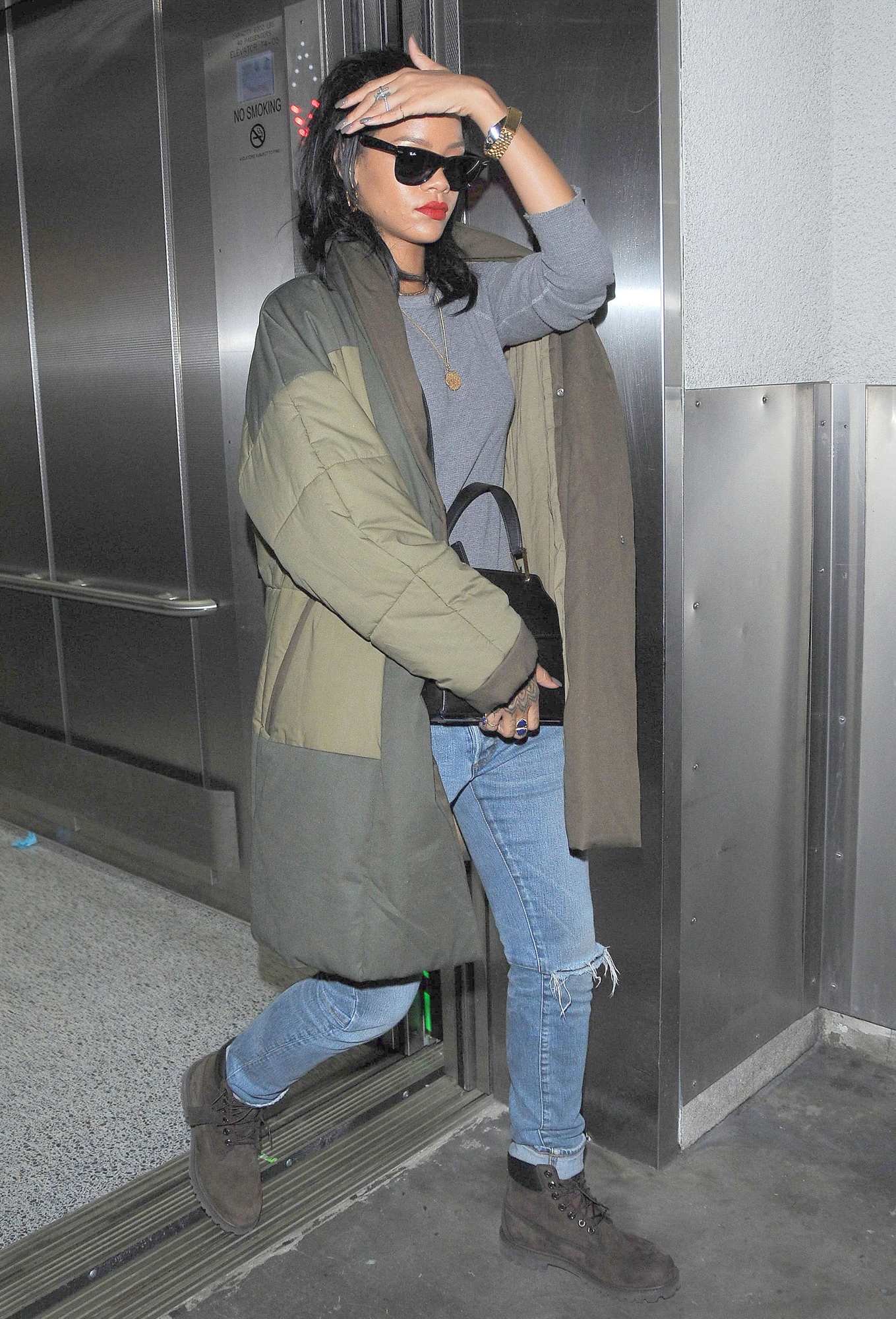 For inspiration (because it's 2014 and one does nothing without inspiration), I turned to some of the magazine's favorite It Girls, particularly Rihanna, Lorde, and Cara Delevingne. These three have something in common: They are praised for assuming a "borrowed from the boys" style that somehow doesn't turn off the general public or incur the wrath of tabloid editors. These are the torchbearers of baggy and they usually look amazing.

In this Rihanna-fied iteration of the androgynous-It-Girl-in-fashion narrative, she can put on men's clothes and still be desirable since wearing an objectively ugly piece of clothing is shorthand for "I don't care," and that's an attractive attitude. It's where she gets her witch powers. Annie Hall is invoked. "Man Repeller" is whispered. Awe is distributed where awe is due. 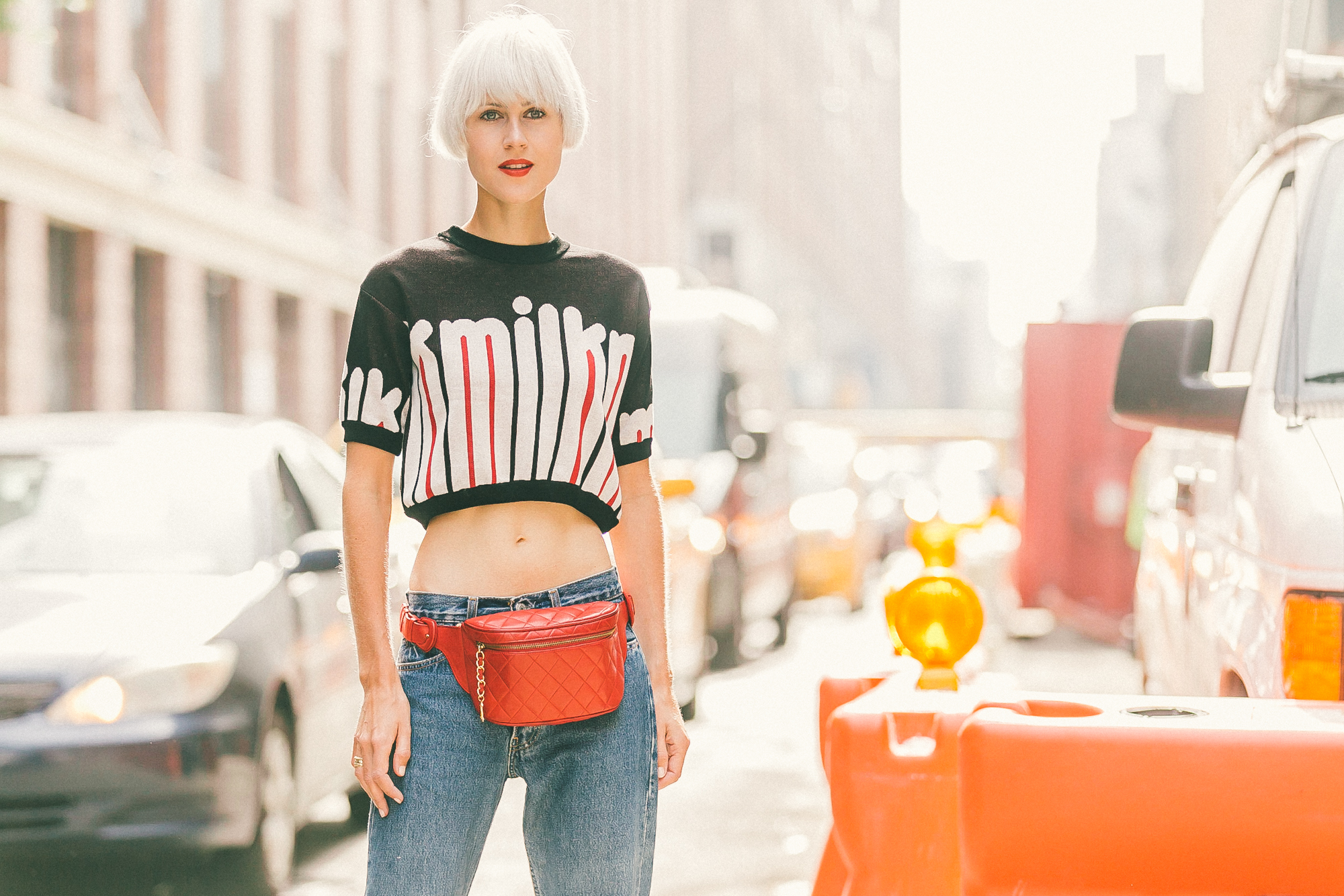 But I knew better than to believe that bull. What the It Girl chatter in the magazines doesn't explain is that said It Girl is usually a professional beauty. A model, for example, or an actress, a performer, or a socialite. These women might use unorthodox clothing to temper their goddess-like features with a little "effortless cool"—but they're still absurdly stunning humans. See Kate Upton in triangle pasties on Sports Illustrated versus Kate Upton in a matronly one-piece on Vogue.

It's where she gets her witch powers. Annie Hall is invoked. "Man Repeller" is whispered.

A normal person doesn't have that luxury. For a normal, it's a small miracle when the odd, awkward, or just different piece of clothing looks halfway intentional. But like Spider-Man or a fortune cookie or my dad once said maybe, with great challenge comes great opportunity. If a normal can wear hideous clothes and still look attractive, she's exponentially more slamming because she overcame adversity. It's basically a super power. A sexy super power. I wanted in.

Was this shallow? Most likely. Was it desperate? Probably. Did it reflect a vulnerable place inside my soul that I should never, ever share with the internet? Almost definitely. So with these three things in mind, I was ready to start shopping!

I texted my friend Evan, a self-identified bro, for a starting place:

Me: I want man pants. Jeans specifically. Any suggestions?
Evan: Man pants for you to wear?
Me: Yup.
E: Like drop-crotch style? You're not into the huggy denim look?
Me: What's a huggy denim?
E: I dunno…chick jeans. But I have a pair of Sevens that I wear to work and out that are comfy, sporting, svelte, etc.
E: Also have Levi's but those are really just for chilling.
E: You're welcome to try mine on but they're probably too big.

I thanked him but passed, then wrote my boyfriend for his thoughts:

Me: I'm going shopping for bonafide denim man pants tomorrow. You have any suggestions?
Luke: What are you gonna use them for? Wearing? Painting? Farm handling?
Me: Wearing.
L: Hmm now that I think about it I'm pretty sure every pair of pants I own that go past my knees are Levi's. All Levi's.
Me: Thank you for not questioning this further.

And finally I consulted my best girlfriend, Liz, who loves ruffles, Dove commercials, and babies more than any other human I know:

Me: I want to buy man pants.
Liz: Mistake.

It looked like Levi's was the way to go because, while svelte Sevens did sound nice, to quote a co-worker, "if there's one thing man pants should not be, it's more expensive than lady pants." Dropping by the store after work, I quickly discovered that I didn't know what the difference between "straight leg" and "boot cut" was when translated to Dude. The retail associate did, however, assure me that "most women" go two sizes up when shopping for men's pants. Who were these "most women?" Were they most-ly Rihanna? Well, I'm going three sizes up just in case. Heck, I'm going up four.

I tried on exactly twelve pairs of pants that day, attempting to locate the proper combination of straight, boxy, and slouchy that would void my hips and spotlight my torso. I waited for the Aaliyah, Gwen, Left Eye effect to take over, the transformation of a pair of pants into a low-slung invitation to wish you were me.

Success? Sort of. I found a straight pair in a stonewash denim with a waist measurement five sizes larger than what I wear in women's. It fit the bill in terms of the aesthetic I was going for. Over the course of my first day wearing them, my stride was a little longer, my slouch a little lower, and I took full advantage of the giant pockets that men enjoy on a daily basis. I could have snuck ten burritos through international security with those things. I had four cup holders always at the ready whenever I needed them. I gave more high-fives that day than ever before because I was living a hands-free, purse-free lifestyle. Is this why guys give so many high-fives? I don't know! Probably!

All that extra physical space between my thighs and the denim felt extremely freeing, but every once in a while, I'd catch my reflection in a window or a mirror, and the look wasn't Rihanna-esque. It was straight-up man. Specifically a 40-year-old father-of-two. Not even a "cool dad." Lame dad. Dad-pants dad.

Confirming my suspicions that the experiment had failed, when I met bro-friend Evan and girly-friend Liz that night for drinks, Evan's first words were, "Wow, those really are man pants." And Liz? "I hate those so much."

So, no matter what my loitering catcaller implied in that special way only he can, I am not a normal with sexy super powers. I am not an Aaliyah among Britneys. I can't just "pull off anything." I couldn't, I'm guessing, "wear a burlap sack and still look amazing." While I tried to practice my very best beautiful person "eff it" approach to the pants project, my attitude was much closer to, "Boy, I hope mom doesn't see me like this and reignite familial concerns that I'm a lesbian because Thanksgiving is already hard enough, you know?"

Anyone who's tried to talk a friend out of a massive style overhaul—from bangs to an inspirational quote tattoo to culottes—could have predicted the end of my man pants tale. (Liz certainly did.) Now I own these absurdly comfortable, absurdly large middle-aged-dad jeans with black holes for pockets that I couldn't manage to look hot in. They keep me humble. They keep me grounded. They keep me real.

But also, they keep me in tune with the message I want to send to the world. They are, to me, like flipping a coin to decide if you want kale or Chinese food for dinner. You're not flipping the coin to pass off the decision-making responsibilities; You're flipping the coin to tap into the feeling that you really want it to be heads because if it's heads then, yes ma'am, you are eating Szechuan chicken tonight. On any given day, for any given situation, if I want to know whether I really care about appearing attractive or not, I just ask myself, Is today a man pants day? And more and more often, the answer is yes.

Aging, but Make It Fashion

The Death of the Plain Preppy Sneaker

View all stories in Essays