This isn't about me, and it isn't about the raw appeal of SoulCycle itself. It's about dudes. Bros. Doing SoulCycle. Of which I am one. A BroCycler.

Walking in late to your first 7 a.m. SoulCycle class is a little like waking up and finding yourself in the middle of Marquee Las Vegas on a Friday night. The orchestration of lights and music, the instructor who functions as a combination guru, motivational speaker, DJ, and personal trainer—for the uninitiated (and riding in one of these classes does feel uncannily like an initiation), it quickly becomes clear that SoulCycle is indeed a spin class on steroids.

For the first five minutes, having, through my own inability to find the West Hollywood studio, guaranteed that I had no idea what was going on, I struggled with the bike and raged inwardly, wondering how something so stupid, so loud and ostentatious, could convince so many people to pay $30 per class—even more in New York!—for the privilege of being yelled at in a sweaty room. Those five minutes passed.

By the time we'd segued into one of the newer Beyoncé songs, I think "Flawless," I realized that a switch in my brain had flipped, and I started doing all the ridiculous movements that are demanded, and by the end I was yelling, or whatever, not quite yelling, which some members of the class really do, they yell like they're falling out of a plane—I wasn't doing that. But I was making noises with my mouth as I rode a bike in place. I was in. 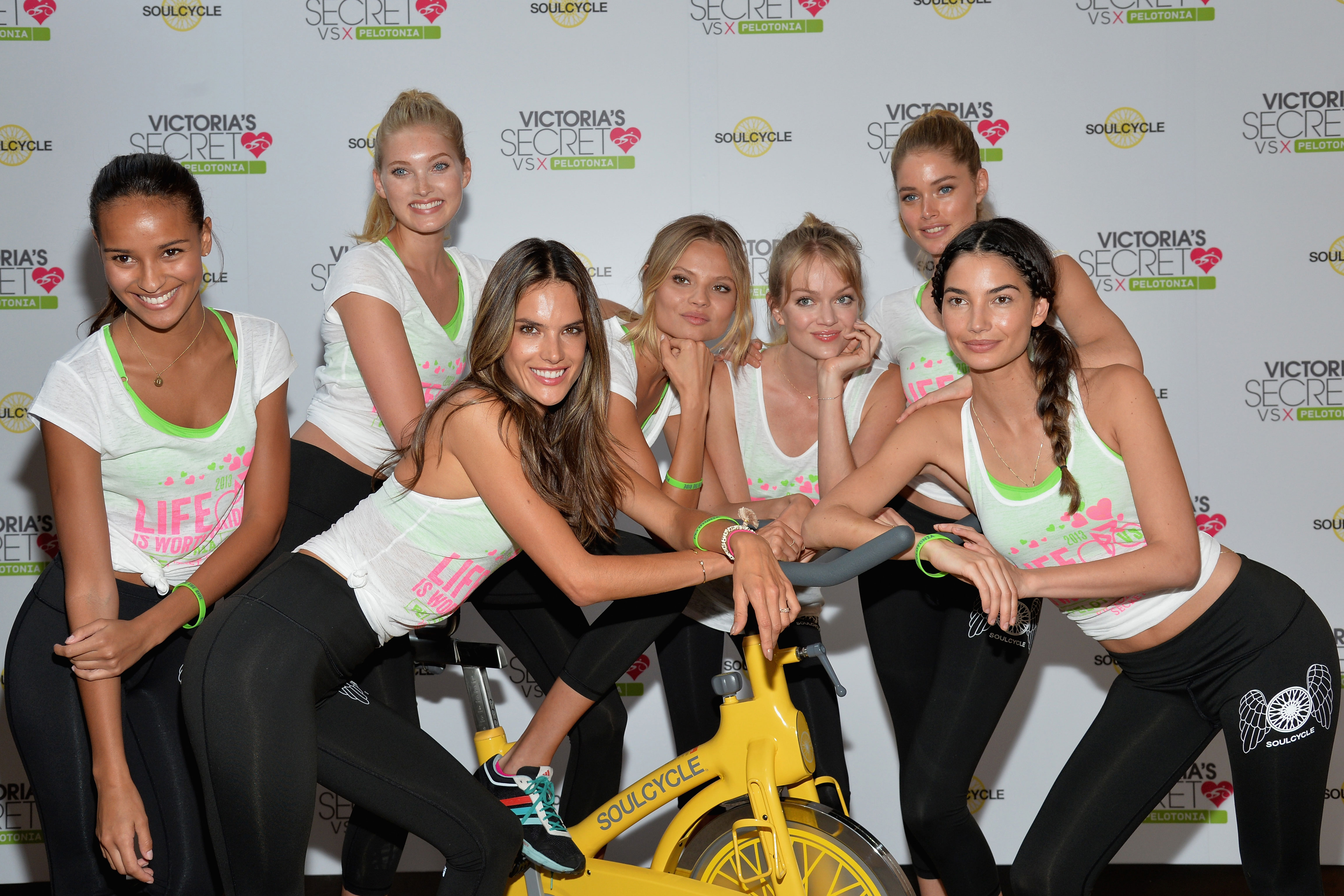 Victoria's Secret models get in on the SoulCycle action. Photo: Getty Images

This isn't about me though, and it isn't about the raw appeal of SoulCycle itself. It's about dudes. Bros. Doing SoulCycle. Of which I am one. A BroCycler. (Quick caveat: I have yet to pay for a SoulCycle class myself. Both I've attended so far—the second one, in which I arrived early and was taught how to use the bike, went considerably smoother, thanks for asking!—were comped by SoulCycle.)

BroCyclers exist somewhat in conflict with the stereotypical perception of spinning today: a lot of celebrities, a lot of Hamptons supermoms, a lot of neon pink skulls. But the SoulCycle folks I spoke to, as well as my own experience in classes that were at least a third male, lend credence to the idea that, if men aren't quite doing SoulCycle as much as women are, they're still a significant presence.

Between his Wednesday morning classes, I spoke with instructor David Zint, who was scouted out of the crowd in a class and asked to teach his own. Zint came out to Los Angeles to be an actor, and he also works as a screenwriter; he looks like a younger, blonder Kevin Bacon, and he speaks with the self-assuredness that seems to be a hallmark of SoulCycle instructors. 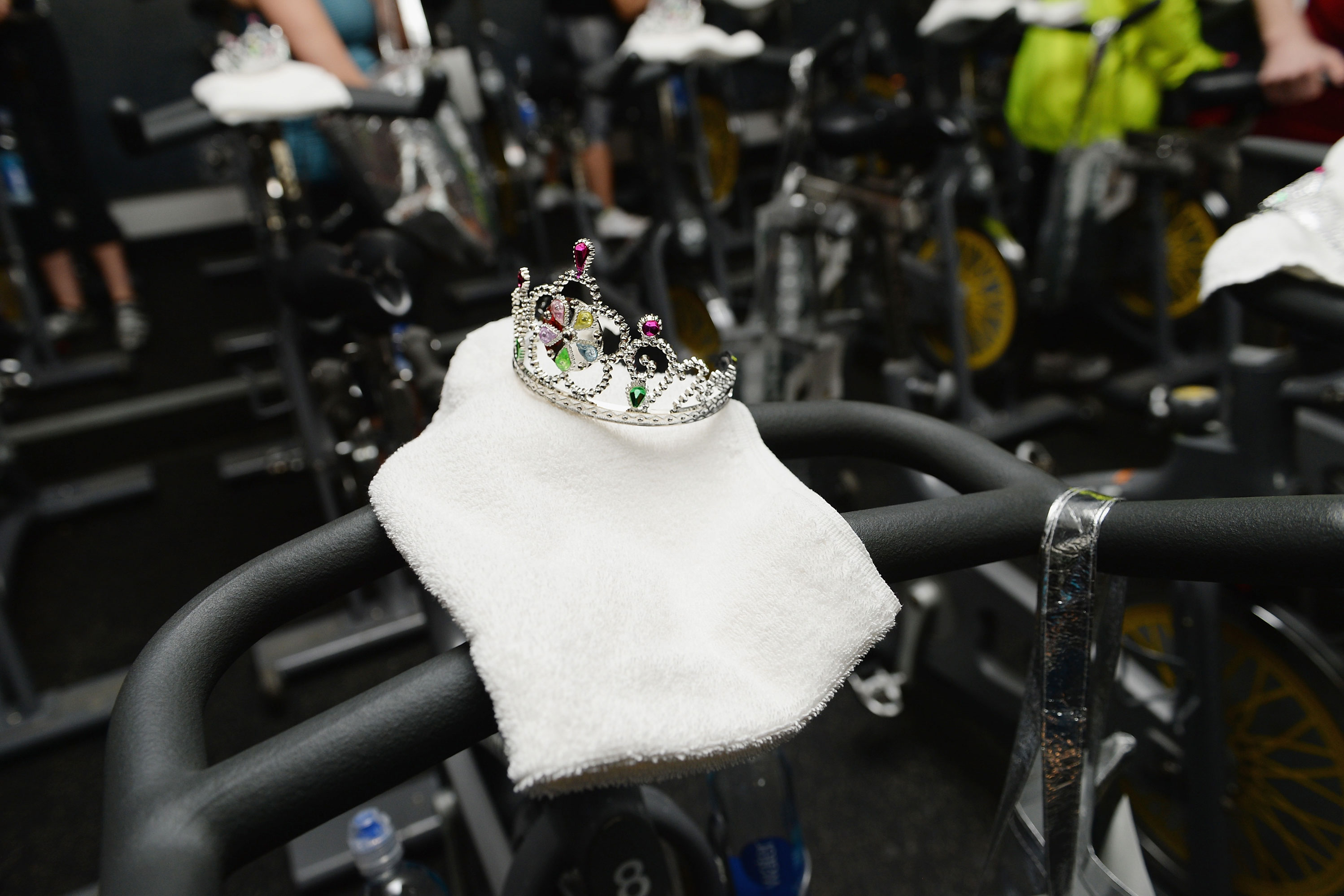 "I think SoulCycle caters to all demographics," Zint said, comparing it to yoga. He said he hadn't noticed a prominent increase in BroCyclers over the two-plus years he's been riding, but he has a good idea of what attracts men to it.

"A, it's the workout: It's going to kick your ass," he continued. "B, the environment gives you freedom to let go—it gives you permission, because it's dark and the music's loud, to take your ego out of it. You're not there to judge yourself, you're there to get your workout in, to have this mental release, this emotional release, and you're being guided. I think a lot of men tend to work on strength training, and what's attractive about SoulCycle is it's strength and it's cardio. It's a full-body workout."

"It gives you permission, because it's dark and the music's loud, to take your ego out of it."

Zint's explanation of why SoulCycle appeals to men dovetails nicely with SoulCycle's general mission statement, which leads to a further conclusion: Possibly, the same things that are drawing women to SoulCycle are—gasp!—drawing men as well. Rather than the performative exhibitionism of weight-lifting, or the lonely zen self-obliteration of distance running, or the high-pitched aggression of competitive sports, or the rabid hyperkinesia of CrossFit, SoulCycle provides a venue for something guys aren't necessarily used to accessing: positive-thinking, inward-focused group exercise.

"I first did SoulCycle with my then-girlfriend about two months before we got engaged. Once we were engaged, it became a way for us to get fit for our wedding together," said Joshua Arcus, a friend-of-a-friend and fellow BroCycler who lives in New York. "The classes are fun, and 90% of the time I walk out feeling good about working out, not bored the way other workouts or classes can be." 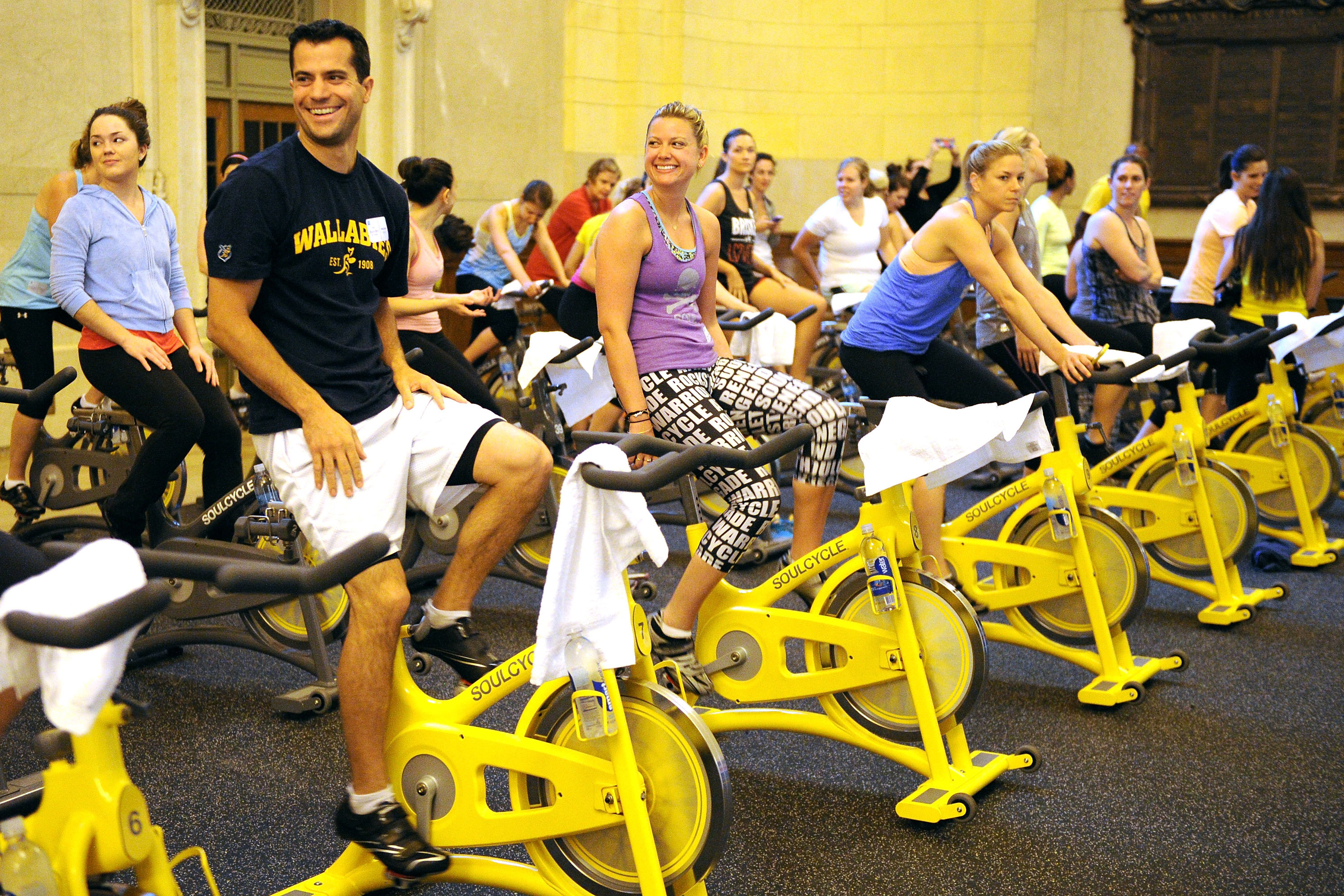 Gordon Blank, another BroCycling New Yorker, agrees: "It's just generally a really pleasant workout. Spinning classes at the gym are pretty standard and mundane, but SoulCycle pumps you up a lot more, plus the whole vibe at those places is really entertaining. It's kind of funny it's not considered a guy thing, since it's literally just pedaling on a stationary bike while someone tells you when to do a couple basic movements. I guess it is still mostly a female clientele, plus there's the whole section of apparel with bedazzled skulls, but I've noticed a lot more guys doing it. I've emailed multiple friends with the subject line 'Tap back at 7?'"

"I've emailed multiple friends with the subject line 'Tap back at 7?'"

BroCycling doesn't stop at the regular-human level, either. There's David Beckham, who SoulCycle officials told me is a dedicated BroCycler in Los Angeles; Bradley Cooper, who, the New York Post reports, once took his shirt off while riding; Jake Gyllenhaal, who caused a run on a particular class when word got out that he was a regular; and Max Greenfield, New Girl star, occasional instructor, and pretty much the platonic ideal of a BroCycler. (Does Greenfield's affection for SoulCycle influence my opinion of it? Yes. Absolutely.)

And BroCycling goes beyond SoulCycle. Flywheel, SoulCycle's performance-obsessed counterpart, boasts Pro Football Hall of Famers Troy Aikman and Shannon Sharpe and reigning NFL MVP Peyton Manning among its devotees. Flywheel even hosts an event at the Super Bowl in which football players and executives ride for charity.

Flywheel's courting of the masculine apex makes sense given how it differs from SoulCycle: Where SoulCycle is almost like EDM yoga, Flywheel incorporates rider statistics, adding a seriously competitive aspect. The company told me that, depending on the region, it sees anywhere from a 60/40 to a 70/30 male-to-female ratio, with Atlanta, New York City, and Texas being areas that trend heavily male. 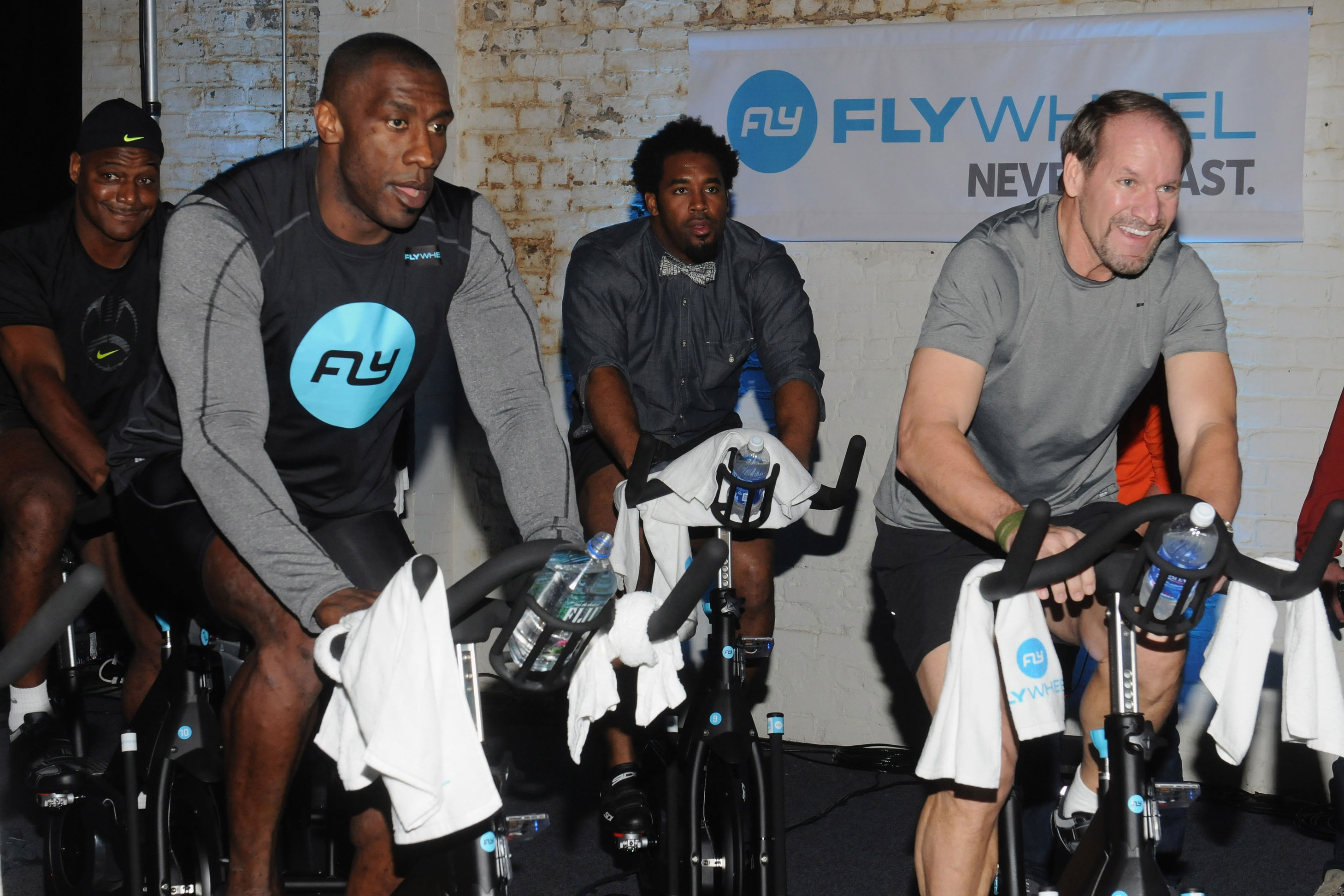 "We always say, what can be measured gets done. All that data lives on our website, so you can see your performance and track your improvement over time as long as you ride with Flywheel," said Adam Rosenbaum, Flywheel's senior vice president of studio operations. "You can track yourself in your region versus other men, you can track yourself across the country versus other men and women—that has a big impact on how men choose to do their workouts. They want to see results and that there's an actual measurable success rate coming out of a Flywheel class."

That makes sense, but could there be another reason dudes are drawn to fancy spin spots?

"There's something to be said about being surrounded by attractive women at a studio like Flywheel," Rosenbaum said.

That's not it. Or, at least, it isn't for me. I'm sure there are guys out there hitting up exercise classes because of women; guys are out there hitting up everything because of women. But for me, part of what was so invigorating about SoulCycle was that it felt asexual, neither macho nor feminine. My fellow riders, male and female, aquiline in Lululemon, seemed like expensively-dressed dolphins. Sweaty and a little confused, we'd shared 45 minutes together and then spilled onto Sunset Boulevard. We'd burned part of ourselves away all while tapping back to Beyoncé. Maybe we even found a little bit of our souls.