The Glamorous Past, Troubled Present, and Uncertain Future of NYFW

As New York Fashion Week is set to undergo a number of changes in the coming months, industry experts reflect on the blockbuster event.

Share All sharing options for: The Glamorous Past, Troubled Present, and Uncertain Future of NYFW

The year was 1993. After decades of fashion designers independently choosing spaces around New York City to present their latest collections, an official New York Fashion Week was born.

Bryant Park was its first home, and 7th on Sixth its first name. For 16 years, temporary tents set up in Midtown Manhattan played host to shows organized by the Council of Fashion Designers of America under the leadership of then-executive director Fern Mallis. After years of swelling success, Bryant Park could no longer accommodate NYFW's volume, and in 2010, the event moved uptown to Lincoln Center.

Fast-forward to 2015 and NYFW is set to undergo a number of changes in the coming months. This February will be its last season at Lincoln Center, after the city settled a lawsuit with advocates who sued over Fashion Week's intrusion on a nearby park. Mercedes-Benz will no longer be affiliated with the event, leaving its eight-year post as title sponsor. IMG, the sports and media management company that bought NYFW in 2001, is acquiring competitor Made Fashion Week, which began hosting shows for cool young designers at Milk Studios back in 2009. And 69 years after it was created by Ruth Finley, the CFDA has bought the Fashion Calendar, the official schedule of New York fashion events.

Even without these upcoming shifts, Fashion Week looks quite different than it did back in the early '90s. The number of designers that present is at an all-time high, the attendance rate is even higher, and sponsors are both plentiful and omnipresent. NYFW is bigger—much bigger—than it used to be, but bigger doesn't necessarily mean better. Fashion Week still faces many obstacles that cloud its potential, and given the imminent changes, industry experts are now implored to reflect on how the blockbuster event came to be, where it currently stands, and what the future will bring.

The Birth of NYFW

The concept of an established fashion event for American designers dates back to 1943, when publicist Eleanor Lambert saw World War II as an opportunity to give American designers exposure since fewer people were traveling to Paris. Lambert created "Press Week," a designated set of days in which designers organized their own shows. Half a century later, Mallis, who headed up the CFDA (and also served as IMG's vice president for nine years before starting her own consultancy firm), stepped in to "organize, centralize, and modernize American runway shows," she tells Racked. "It was a way of speaking as a unified industry to the world about what was happening in New York." 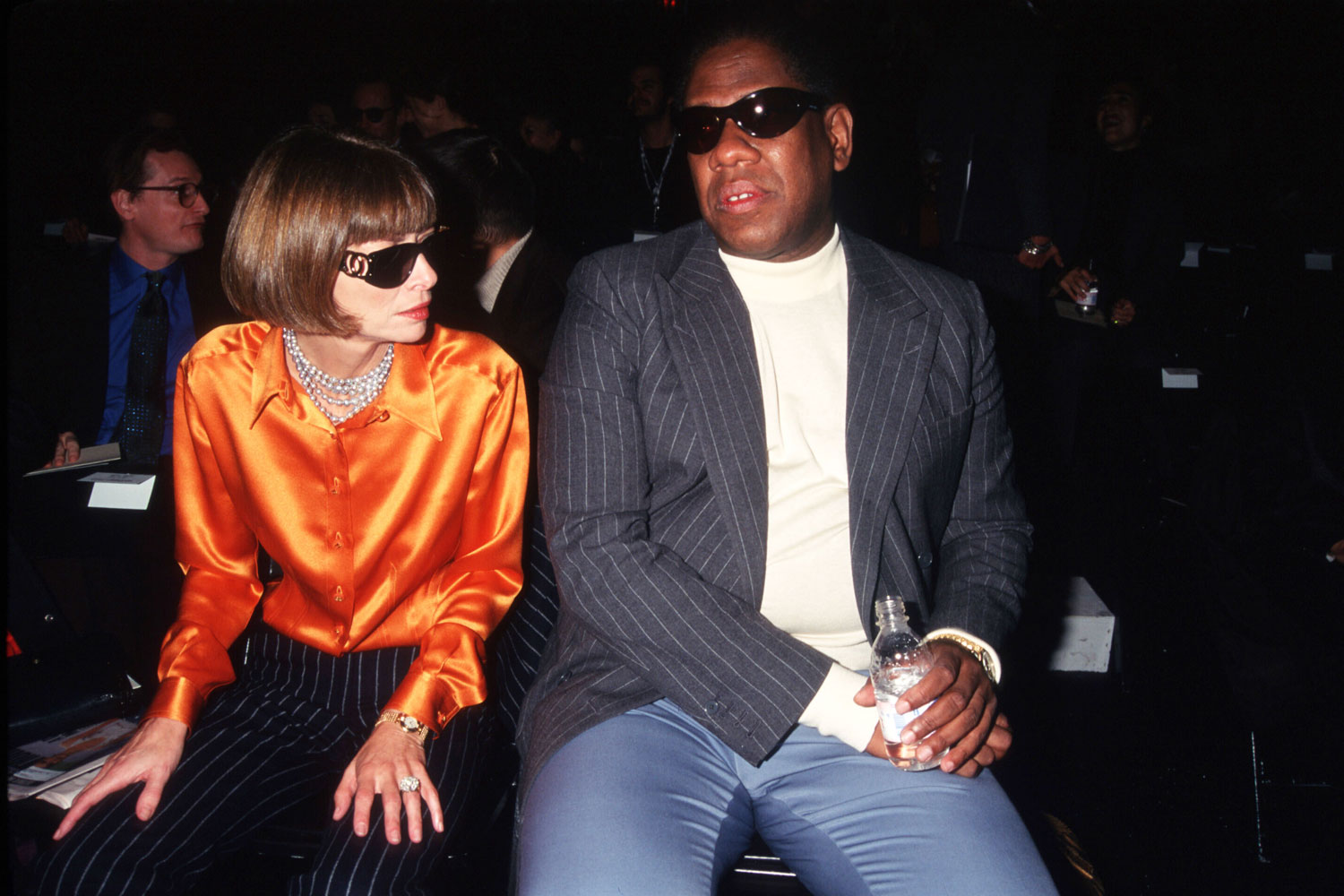 Fashion Week needed supervision because, as she explains, things were getting out of control: "There were seasons where editors were getting pulled out of failed freight elevators or had to wait for hours for power to go back on in Soho lofts. But what did it in was the accident at a Michael Kors show when the ceiling collapsed on the runway [in 1991] and crumbled plaster landed on models and editors in the front row. People were putting their lives on the line to see fashion shows—it was frightening!"

"People were putting their lives on the line to see fashion shows—it was frightening!"

Establishing Fashion Week at Bryant Park also cut down on costs and labor. Up until then, each designer was responsible for finding and paying for their own space, lighting, sound, and security. Not to mention, sets had to be broken down if the space they chose was rented out for another kind of event during the week, only to be put back together again just a few days later for a different fashion show.

"It was a revelation," Mallis says. "It was a convenient, professional, top-of-the-line venue where people could come in and personalize the space. Organized shows put American designers on the map and changed the fashion landscape forever. Before that, there were 50 shows in 50 locations. Everyone did their own thing without understanding what a nightmare it was if it was your business to get from one show to the other."

Mallis believes Fashion Week ran into trouble when it moved to Lincoln Center; the event got so big that it moved off course from its original mission. While she maintains that Fashion Week is still relevant ("There's no better way to see a collection than to see it on a runway, pulled together with hair, makeup, and accessories"), she thinks IMG needs to return it to its roots and "give designers a platform, make it easy for people to see collections, and generate as much business as possible."

Bryant Park and its famous tents were the home of NYFW from 1993 until 2010. Photo: Getty Images

In recent years, efficiency has been a top priority for IMG, who declined to comment for this story. An ever-growing roster of designers and a finite amount of space at Lincoln Center has meant that many designers have had to show their collections off-site at other venues around the city, leaving editors, buyers, and other Fashion Week attendees running uptown, downtown, and even between boroughs. While there has been a push to use Fashion GPS for streamlined check-in and seating and an attempt to organize transportation from show to show, NYFW largely remains difficult to navigate.

Steven Kolb, CEO of the CFDA, admits that the numerous, disparate locations are hard to swallow; one of the CFDA's goals in acquiring the Fashion Calendar from Finley was to generate some cohesion.

"There is confusion around what New York Fashion Week actually is," he says. "It's a collection of produced shows, not just a centralized venue. Of the 350 or so shows, approximately 60 are with IMG and about 30 are with Made. Both very important to Fashion Week's success. The remaining 200-plus shows are happening at independent venues all across New York. All of this falls under the CFDA's Fashion Calendar, which is the official scheduler of New York Fashion Week. An opportunity now exists for the CFDA to build on it and create a unification of all 350 shows." 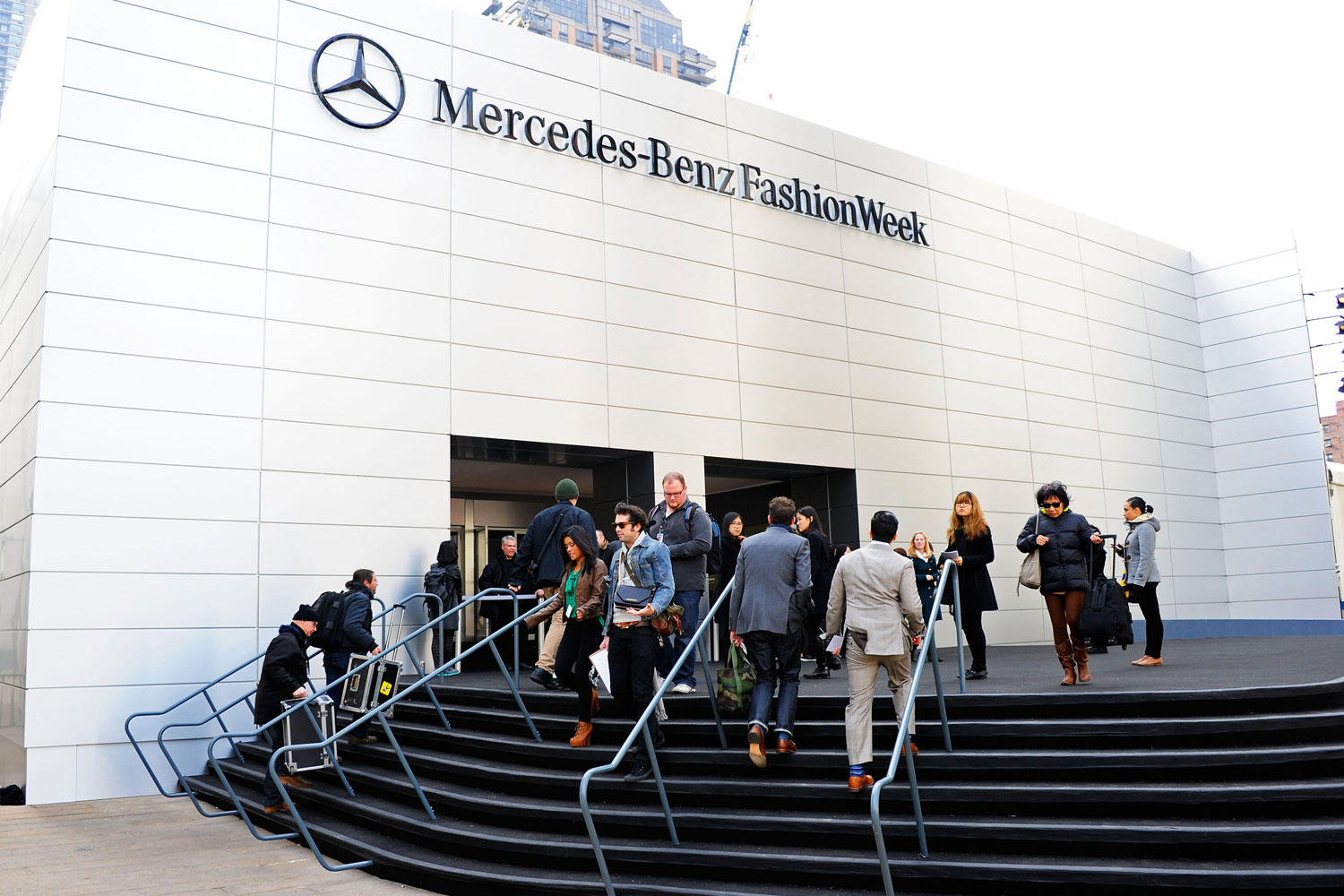 NYFW is moving from Lincoln Center and losing Mercedes-Benz as a sponsor. Photo: Getty Images

Online coverage and social media has also helped to grow Fashion Week, but the inclusion of the digital masses has rubbed some insiders the wrong way. In 2011, then-New York Times fashion reporter Eric Wilson wrote that "the real point of Fashion Week, to promote collections to editors and retailers several months before they will be in stores, is becoming lost in the age of instant online accessibility. There is, in fact, a curious sense that just when fashion has become a vibrant force in popular culture, attracting a new generation of designers (and wannabes), Fashion Week is losing its relevance."

Kolb argues that Fashion Week is merely trying to keep up with the times: "Yes, the shows have expanded from just trade only. Yes, technology and social media have pushed the speed at which the consumer is engaged. Yes, fast fashion has influenced seasonal dressing. This isn't happening in a vacuum. People involved in Fashion Week know this. The change comes from accepting change and adapting with it."

New York Fashion Week was originally a means of exposing designs to the press and wholesale buyers. Today, Fashion Week attempts to serve the same purpose while also existing as a glamorous IRL advertisement for brands.

"Is it a marketing opportunity or a trade show?"

"Is it a marketing opportunity or a trade show?" muses Friedman. "Marketing is directed at consumers, trade at the industry—this is a confusing moment. It's incredibly messy. Fashion Week has become a form of entertainment for some brands, and that transition wasn't managed by anybody. I think the CFDA needs to think about shaping the narrative of the week, and decide whether it's for consumers or if it's for people who channel it to consumers."

Deciding that Fashion Week no longer caters to trade wouldn't necessarily be a bad thing—it would certainly help to justify the oversharing, overspending, and overscheduling that has taken over—but it would alter who attends the shows. If Fashion Week were simply a marketing ploy, would it remain relatively exclusive (and free for attendees) or would anyone who enjoys a good runway parade be able attend (provided they purchase a ticket)? Does it make sense for buyers and editors to attend if the objective is to show off to consumers and consumers alone?

Parallel to Fashion Week's existential crisis is a different kind of branding problem. Random sponsors pimping out everything from ice cream to energy drinks to electronics have been incredibly visible at Fashion Week the last few years. The Washington Post's fashion critic Robin Givhan even remembers a season when plumbing fixture company Kohler was set up shop in Lincoln Center. While she enjoyed the high-end bathroom facilities they installed on-site, the partnership left her puzzled.

"The issue is not about clothing," she says. "What's gotten under people's skin is this marketing machine. The week is able to pull in sponsors and companies that are not directly related to fashion, but who want to glob onto the gloss and prestige. That starts to take away the substance of it. People walking into the main lobby of Lincoln Center felt a bit like they were walking down a Vegas strip. Some designers left for other venues because the atmosphere was distracting."

"What's gotten under people's skin is this marketing machine."

Givhan believes this lays bare a more deep-seated issue that the American fashion industry has faced from the beginning. American designers have always felt the need to prove their legitimacy to their European counterparts and fight back against their commercial reputations.

"A lot of the direction in fashion used to come from Paris," she says, "to the degree that American design houses were copying what they saw in France. When the American fashion industry came into its own in the sixties and seventies, it had to prove its aesthetic. The idea that the reputation creative artists worked so hard to build could be dismissed by a commercialized Fashion Week leaves a certain level of uneasiness."

With so many changes afoot, it's not entirely clear what the Fashion Week of the near-future will look like. There seems to be a shift towards cohesion given the acquisition of both Made and the Fashion Calendar, but can something so massive truly be streamlined, much less scaled down? Will NYFW cater entirely to consumers in the coming years? How will its relevancy be affected?

February will see the end of a certain era, and answers will begin emerging come September, but this is sure to be a long process. "Fashion Week lost its focus," explains Givhan. "Perhaps because of that, it lost its luster. It became watered down and ill-defined. They need to try and figure out what happened and move forward."