With marijuana becoming legal in more and more places across the US, it was only a matter of time before unlikely worlds began to collide.

With marijuana becoming legal in more and more places across the US, it was only a matter of time before unlikely worlds began to collide. Fashion, meet weed.
We might never spot Anna Wintour in a drug rug or see Karl Lagerfeld design a Chanel bong, but pot's reach extends far beyond stoner stereotypes these days. Take designers who are embracing the ubiquitous pot leaf as motif or selling Style.com-endorsed gold joint cases.

One person who spotted this trend early on was writer and PR girl Katie Shapiro. An Ohio native who previously worked in New York's fashion scene, Shapiro was living in Denver when Colorado and Washington became the first states to legalize the recreational use of pot in 2012, with dispensaries officially opening to the public last January.

After hearing that the city's daily newspaper, the Denver Post, was launching The Cannabist, a website specifically dedicated to weed, she pitched the idea of leading the site's fashion and shopping coverage (full disclosure: she also contributes to Racked sister site Curbed Ski). As what is very possibly the world's first marijuana style writer, Shapiro reports on the ever-evolving world, interviewing designers about the incorporation of weed into their designs and discovering luxury paraphernalia. Shapiro even runs an ongoing series where she smokes up with local shopkeepers.

We caught up with Shapiro to talk about getting stoned on assignment, the pot industry's struggle with sexist marketing, and just how high high fashion will get.

What did you do before you started writing for The Cannabist?
I grew up in Ohio and landed in NYC after school. I worked in PR for almost five years, first at Cynthia Rowley and then at different boutique agencies working on different beauty brands. I was ready for a change of pace and relocated to Denver in 2007. I was the PR director for Denver Magazine while getting my master's in journalism at CU Boulder. Our magazine was bought out in 2011, and at that point, I decided to go off on my own and start a PR consulting firm and also dive into freelance writing. Coincidentally, I moved around the same time the medical marijuana movement was gaining traction in Colorado. It's been interesting seeing what it was like when I arrived in 2007 versus seven years later. Everything has changed.

How did you land this particular beat?
In December of last year, I learned that the Denver Post was starting a website dedicated to marijuana coverage to launch in conjunction with recreational legalization, which came into effect in January of last year. Once I saw the site and all of the content, I saw there was an opportunity for a style section. I pitched the idea to Ricardo Baca, who was named the marijuana editor for the Denver Post and is the founder and editor-in-chief of The Cannabist. He let me run with it.

What types of stories do you work on?
I've covered everything from patchouli products to pop culture moments like Sarah Silverman on the red carpet during the Emmys showing her vape pen to E! or when Hermès recalled its Birkin bags because people complained the bags smelled like pot. I also do a series of interviews called Shop Sesh where I visit Denver-based artists and designers, people who are culturally involved in the community and are proud pot smokers. We do an in-person Q&A and we usually share a smoke during an interview.

Does smoking affect your writing?
When I need it to! I don't ever really smoke during the workday because half of my work life is PR and the film industry and the other half is freelance writing. I tend to do it at night or on the weekend. I find that sometimes it's a great way to get the ideas and words flowing. 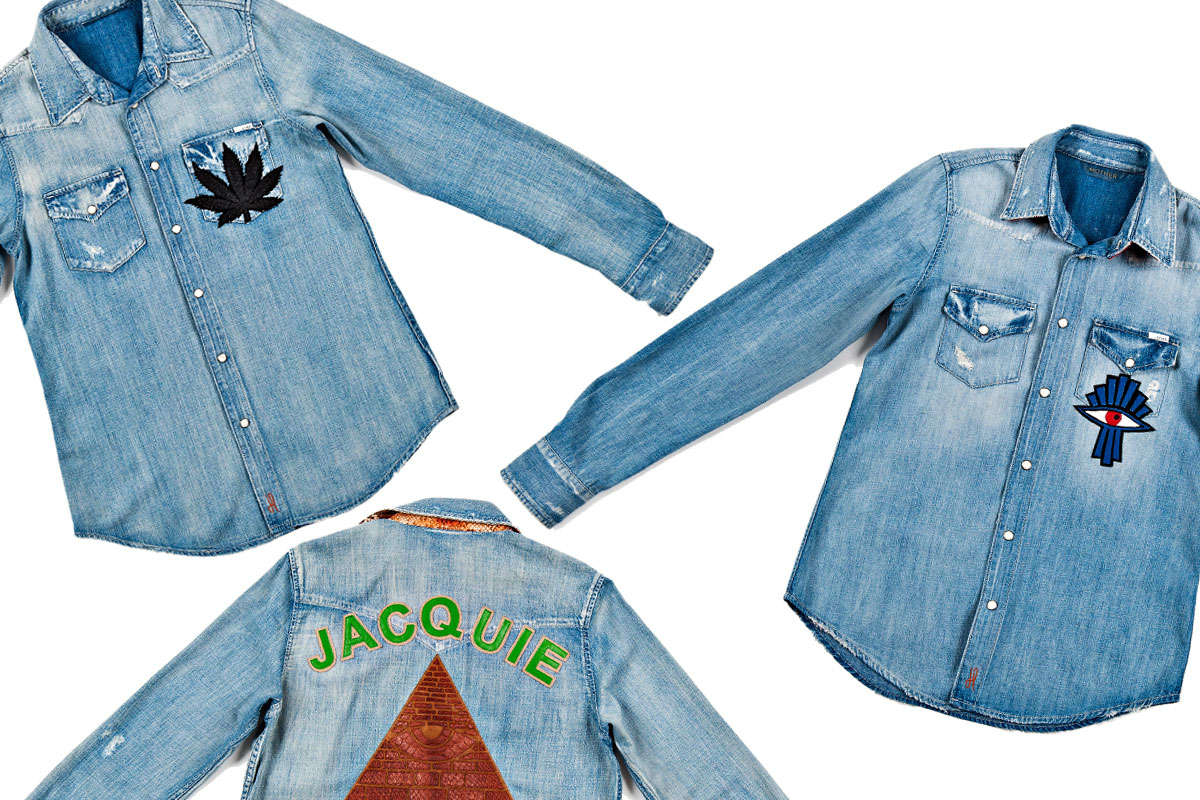 Do your editors assume you're going to be stoned on the job? And is that okay?
Yeah! And it is!

What celebrities and fashion people do you see as the biggest advocates for pot?
The obvious celebrities that are loud and proud are Miley Cyrus and Rihanna. Other people are starting to become more comfortable speaking out about it, like Sarah Silverman, Susan Sarandon, and Whoopi Goldberg. People like that give it a voice. Celebrities play into it more so than high fashion houses who aren't talking openly about their designers smoking pot for creativity. That's something that's obviously not talked about.

Have you seen weed being embraced from a design perspective?
The pot leaf is kind of everywhere. This one visual designer, Jacquie Aiche, based in LA is a prime example of how to make it look chic. She makes delicate jewelry—tiny pot leaf rings and earrings. She also did a limited edition collaboration with Mother Denim, which had these cool denim shirts with giant pot leaves emblazoned on the back. Then there's someone like Lucien Pellat-Finet. He has three signature symbols: a pot leaf, a skull, and a peace sign, and he does amazing cashmere pieces from France. Then there's someone like The Clashist who does pop culture collages on sweatshirts, T-shirts, socks, and leggings. She's someone that pokes fun at it in the best way possible.

As pot becomes mainstream, do you see more people making room for it in the luxury sphere?
That's definitely the direction things are going in. Just like any product, there's that niche market where there's room for luxury. Spending time in Aspen, I've seen that unfold, especially during the crazy Christmas week where the town is packed and people are curious and popping into dispensaries to buy products and accessories. That's definitely something that's going to be a part of this whole new world. Over the summer, I discovered a brand of pipes called Timberado. It's a spin on the Native American peace pipes that were used hundreds of years ago. They are handmade in Aspen and are really beautiful wood pieces with rare gemstones on each end. They run anywhere from $500 to $3,000. There are also a couple of different artist collaborations where limited-edition, custom glass is made. I think this is something that will continue to grow.

Has there been a buzz in the beauty industry too?
There are a lot of THC-infused topicals out there that are really good for pain relief. They don't get you high, but they work with the skin to penetrate that way. One that I like is Apothecanna. Also, hemp oil is used in a ton of products. It's great because it has high levels of vitamin C and is also an antioxidant. Another thing that's happening here in Colorado is that spas are starting to incorporate cannabis products into massage treatments. Also, on our website, we reviewed a THC-infused spray that heightens orgasms for women. So, yeah, there's a lot of crazy things happening out there.

Could you see these products being sold at, say, Barneys 10 years from now?
Hopefully! I think it's one of those things that will become a part of our culture, especially with so many more states legalizing recreational use. I think in 10 years, depending on where we're at because who knows what the dispensary and regulation scene will look like, seeing these things on a shelf at a place like Barneys could be a reality.

Have you seen the interest in fancy pot itself evolve?
Yes. I go to a dispensary that's one of the very few that's a 100 percent organic growing operation and totally free of pesticides called L'Eagle. There are so many different businesses opening and it's growing so fast that as a consumer, you become more aware of what's going on in the actual plant that your smoking.

What about artisanal edibles?
Edibles are a whole other beast. There was a ton of controversy surrounding them after they were legalized. There was a lot of confusion with dosing and packaging, and with candy and people being worried about kids and pets getting their hands on it. But a lot of people are starting to explore this world and capitalize on it. One place that comes to mind is Sweet Grass Kitchen. It's a boutique bakery—the packaging is cute and the treats are delicious. 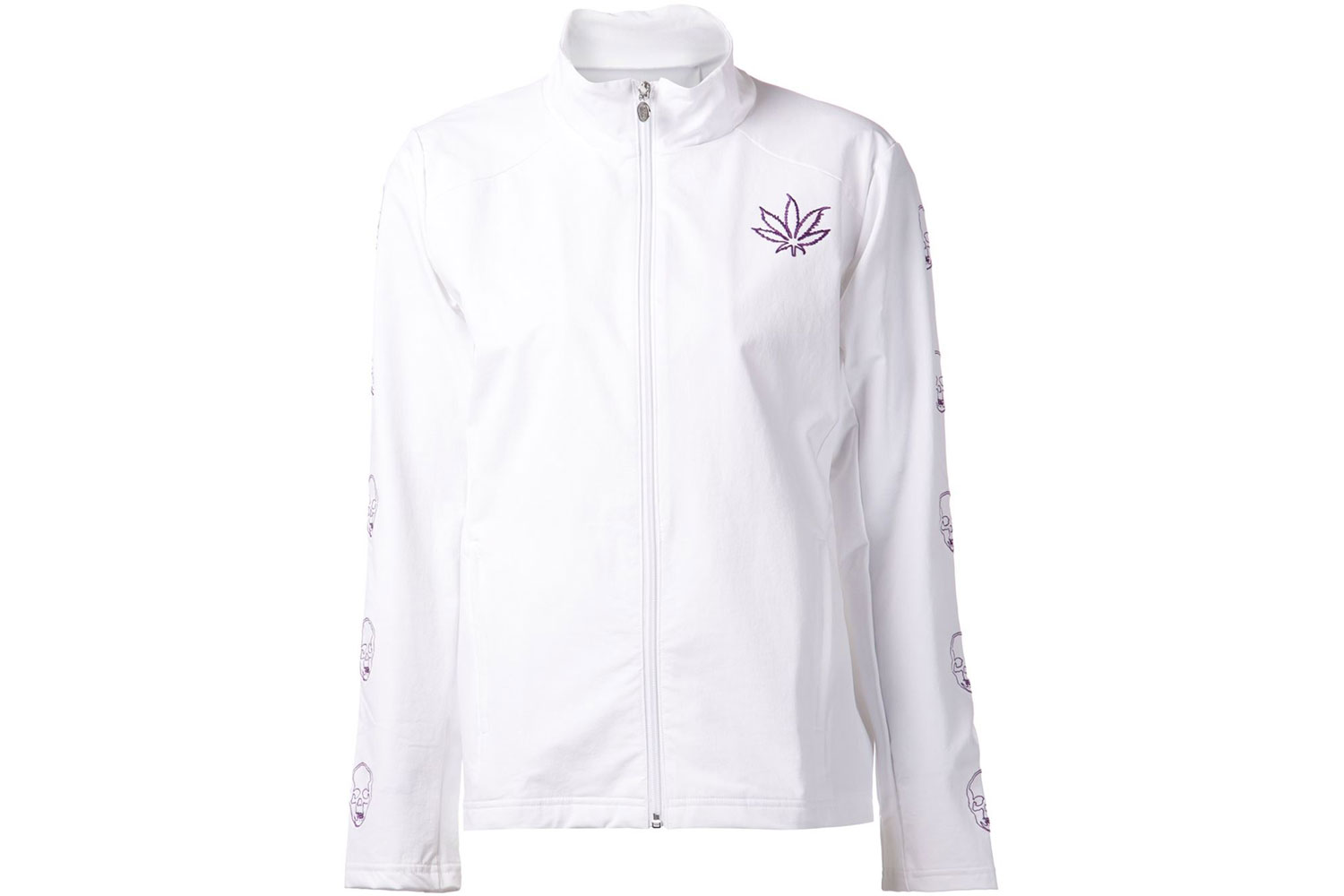 What's the best part of your job?
It's being a part of a new and really exciting media outlet where I'm able to write about marijuana and style. It's been cool to be a part of the site since day one; what Ricardo's doing is pretty groundbreaking. He's been with the Denver Post for 12 years now, and he, along with freelancers and staff writers, have shaped the culture of what this world we live in looks like.

What's the most surprising thing you've learned about weed culture?
It's surprising for me to find that there's still a somewhat, if not totally, socially negative stigma towards it. People still aren't completely okay with opening up as pot smokers, especially when I'm calling them for a story. Even though I know that they smoke, they aren't comfortable sharing that with me as part of the media.

Do you think weed culture will ever be completely embraced by high fashion?
I can't speak to who is going to endorse it, and it will obviously still be a sensitive subject until it's legalized everywhere, but I think the subject is very trendy. In October, Elle dedicated an entire week of online coverage to pot. Simon Doonan wrote a piece for Slate about the comeback of the hippie. I think it'll be more about the lifestyle and the trends coming back into fashion instead of just stamping a leaf on something. Fashion will pick up on what's happening and incorporate it in its own way.

What do you think is the industry's biggest obstacle to overcome?
Looking at paraphernalia manufacturers and dispensaries, there are plenty of "ganja girls" and "stoner babes" hitting bongs in bikinis for calendars and websites. There are more of us out there who are smart, professional, successful, and even stylish that are involved in the industry, or are just regular cannabis smokers. Now that this door has opened up for everyone to get involved, there are so many exciting things that are happening that can shift this image.