It's Time to Admit That Prada's in Decline

Family-run for three generations, the 102-year-old Italian brand has long been synonymous with capital-F Fashion—but the tide is changing.

Share All sharing options for: It's Time to Admit That Prada's in Decline

Shoppers are packed into New York's Saks Fifth Avenue flagship one recent winter evening, gift cards in tow and post-holiday deals in effect. Chatting with women in the department store's luxury handbag department, it's easy to gather which brands inspire the most excitement these days: there are classics like Goyard and Céline and newer kids on the block like Proenza Schouler and Alexander Wang. But among the labels Saks shoppers rattle off, there's a conspicuous absence of a fashion powerhouse: Prada.

"I see the brand as something my mother owns," Amy Lewis, a tourist from Chicago, explains. "I guess I think they're outdated? I'm just not interested. I know they have classic pieces, but they're not something I would invest in. They're like in-your-face luxe and I prefer the more subdued."

Liza Grace, a makeup artist from New Jersey, agrees: "Maybe I would have bought a wallet or clutch years ago, but it's not a company I'm going to constantly be checking in on."

Family-run for three generations, the 102-year-old Italian brand has long been synonymous with capital-F Fashion—the devil wears Prada, after all. Miuccia Prada's smart, eccentric designs have won over legions of fans, which has in turn translated to a whole lot of cash. In 2013, the company reported a net income of 3.59 billion euro, or roughly $4.2 billion. 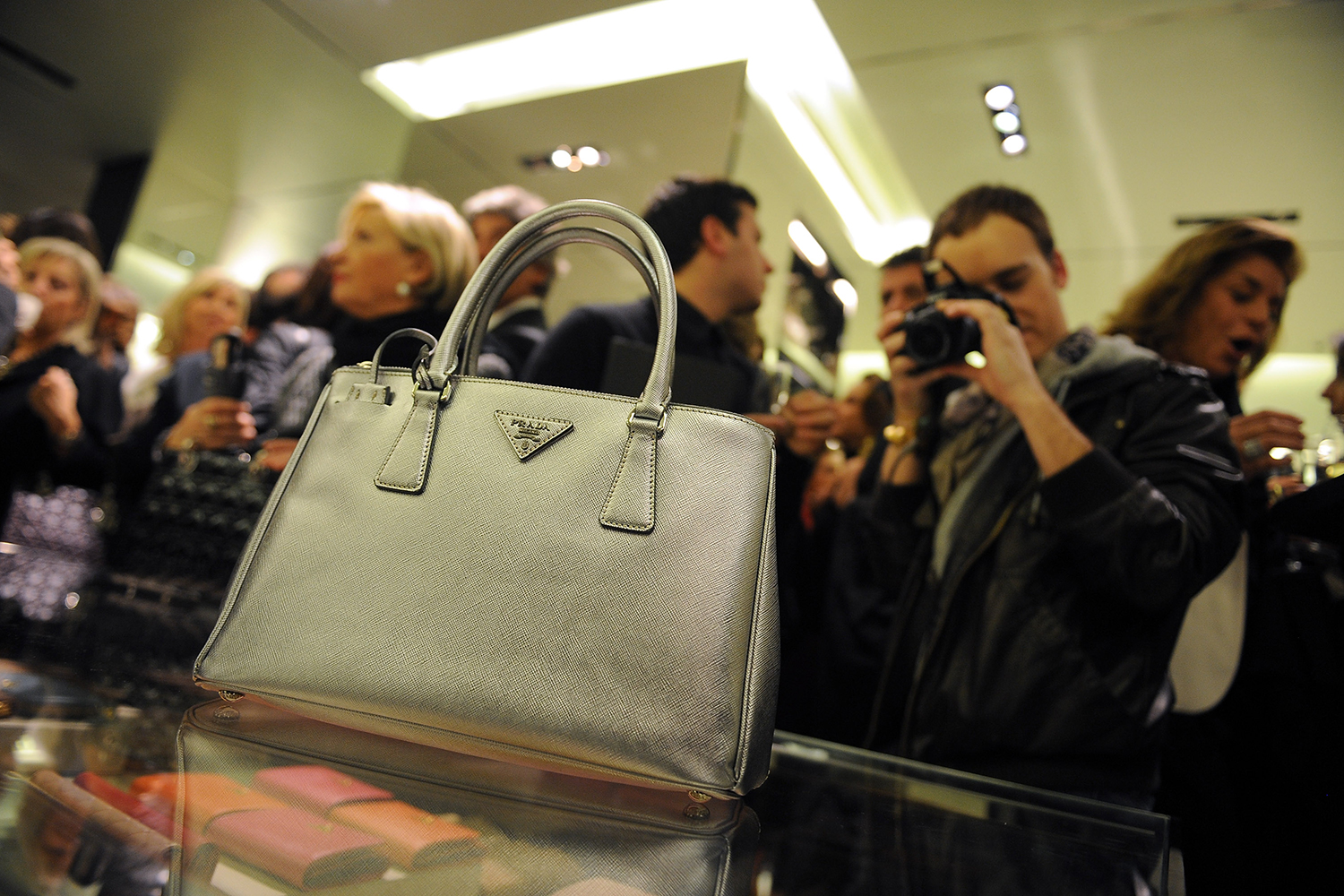 But Prada's relevancy appears to be slipping, and it's not just the Saks shoppers that think so. Last month, Prada, which also owns Miu Miu, Church's, and Car Shoe, announced a nine-month decline in net profit. Numbers dropped 27.6 percent to 319.3 million euros (around $427.8 million), compared with the 440.9 million euros, or $582 million, that was reported in 2013. Speaking about this slumping profit, Prada's chief financial officer Donatello Galli declined to share a 2015 outlook with analysts, though he did say the brand was not expecting any short-term improvements. Prada is now planning on delaying, or even canceling, the opening of 80 stores that were slated to roll out in 2015. (Prada declined to comment to Racked for this story.)

"This makes you scratch your head and wonder if it's a blip...or if this is turning into a negative trend."

"We acknowledge that the results are below expectations, not only for external market conditions, but also for some internal factors," Galli said. "We need to adapt our organization to a context of market volatility. We lacked volumes and probably also new products in some price ranges."

Analysts point to unrest in the Asia Pacific market, which accounts for 38 percent of the brand's sales, as a reason why the profits of Prada (as well as other luxury companies) have been hurting. Between pro-democracy protests in Hong Kong and China's recent campaign to crack down on corruption, luxury purchases have stalled.

Couple that with turmoil in Europe (political tension in Russia, Spain recovering from a recession), and the numbers make even more sense. But as Paul Swinand, a retail analyst with investment research firm MorningStar puts it, "This makes you scratch your head and wonder if it's a blip to bigger and better things or if this is turning into a negative trend." 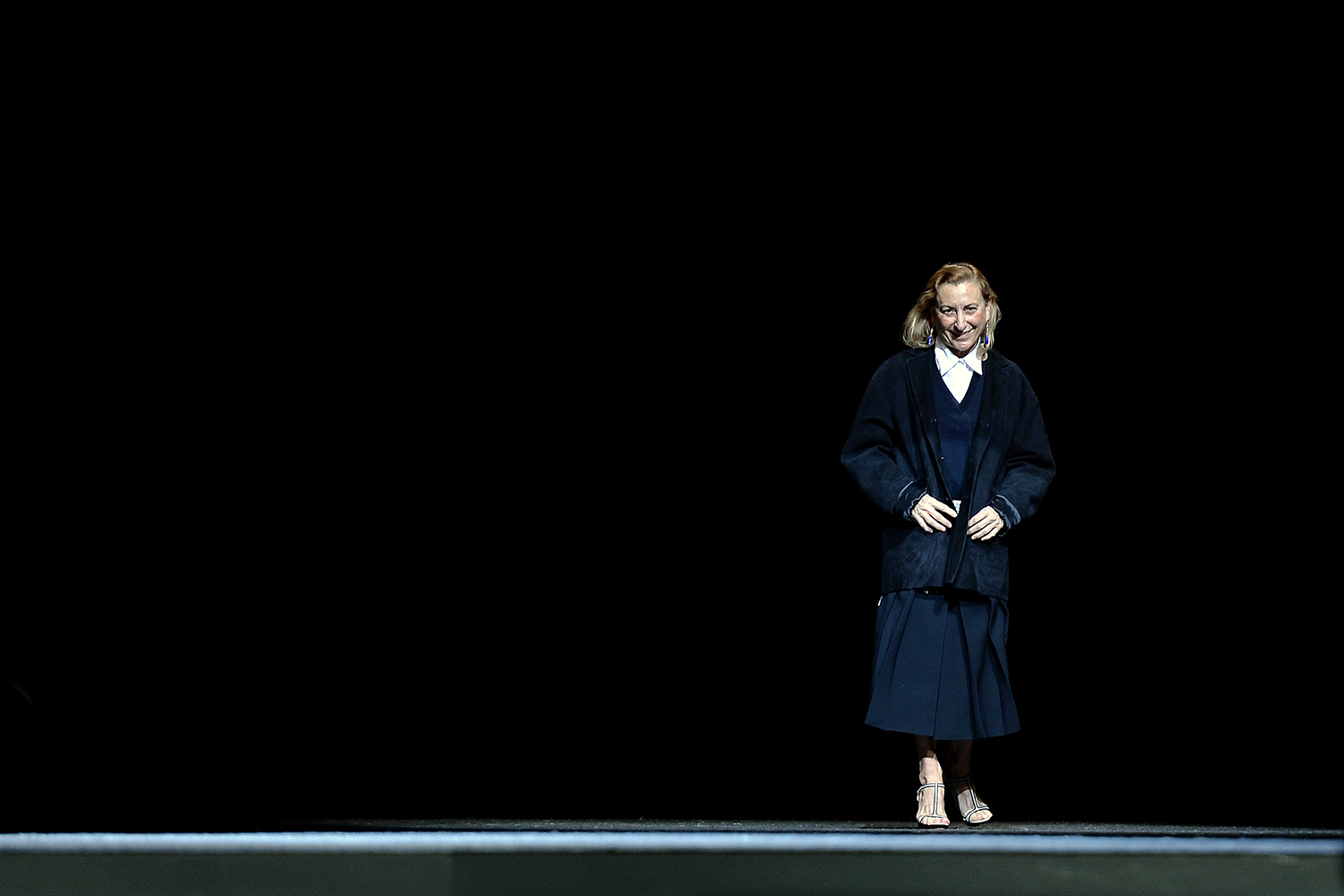 Global turbulence aside, shoppers agree that the desire for Prada is on the decline, a fact best illustrated by the state of its leather goods business, which in recent years has accounted for nearly three-quarters of the brand's bottom line. Handbag-obsessed readers of the website Purseblog post in forums with titles like "Prada Bags: Now Made in China for Italian-Made Prices" and "Goodbye Prada!." They posit that the quality is not what it used to be, and that newer, more exciting It bags are dethroning the brand's greatest hits.

"I don't think people are walking away from the brand completely, but I've seen people drifting," says Pattie Rechtman, who runs Purseblog's forums. "They're trying new things and losing interest. The totes still seem to resonate, but people who have bought the brand in the past are the only ones buying it now."

A brand is "only as good as its It bag."

Avid purse consumers have moved on to cooler new classics like Proenza Schouler's PS 1, while lower-end designers have also picked up steam. Michael Kors and Kate Spade churn out reliable products that cost less than Prada's. Even a brand like Coach, Rechtman adds, has climbed out of a design funk to produce high-quality bags that are fashionable and affordable: "Coach has chipped away at the leather market for the last few years. Its quality and colors have attracted a lot of people, and the price point is more attractive than Prada's." A brand is "only as good as its It bag," she explains, and other brands have moved in on Prada's territory.

As a 2013 EuroMonitor report echoes, "The company's poor performance overall in US luxury goods has been due in part to the dominance of Coach and Michael Kors. Michael Kors has a strong presence in US designer apparel and in luxury accessories, while Coach is the leading player in US luxury accessories. These companies have cannibalized Prada's performance at the lower end of the price spectrum, while strong growth by the Louis Vuitton brand has undermined the company's performance at the higher end of the price spectrum." 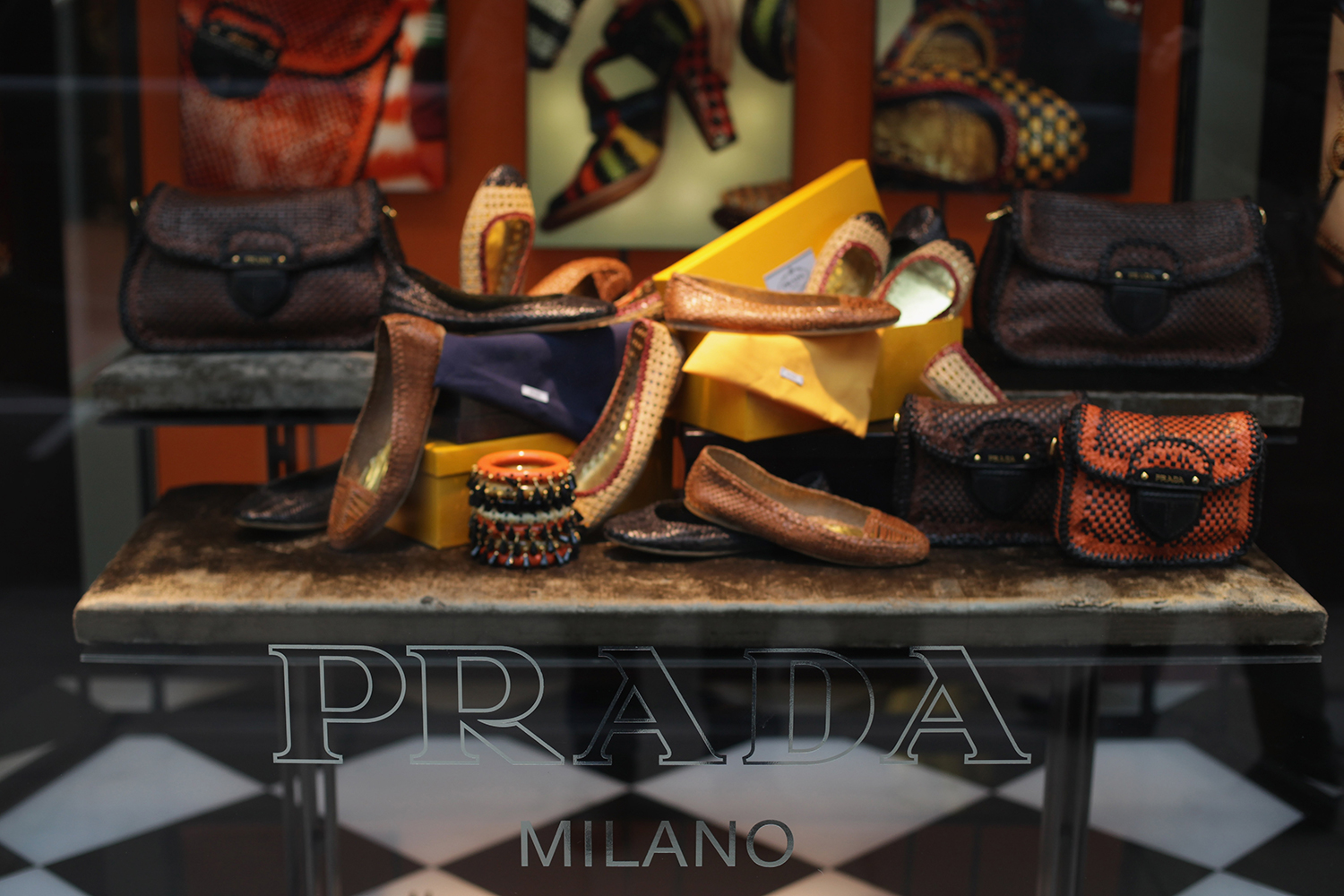 Prada's prime years, according to Hana Ben Shabbat, a retail practice partner at A.T. Kearney, were 2001 to 2009; in 2011, Prada joined the Hong Kong stock exchange and became a public company. While privately-owned luxury brands like Chanel and Goyard can take a more discerning approach to merchandising, Prada has had to answer to stockholders in recent years. Though there's certainly no shortage of items to purchase, novelty is what's been missing, Ben Shabbat notes.

"This is about innovation," she says. "Prada was successful when they were innovating and launching truly new product. Every collection, every season demonstrated the brand's ability to reinvent. But that has slowed down over the last couple of years, and now we are seeing the results of it."

"You can only ride the wave of reputation for some time."

Take Prada's Saffiano bag, arguably the brand's most successful. Season after season, the brand releases slight variations on the leather tote, and while it might be Olivia Pope's favorite accessory, PurseBlog managing editor Amanda Mull believes the brand's reliance on the staple backs them into a corner.

"It's a pretty conservative place to be in, being known for the Saffiano, just in a different color or size," she says. "Prada doesn't experiment with fabrication or material. They don't reach as far outside of what people know them for, unlike other brands that know success, like Chanel or Fendi."

Ben Shabbat agrees that Prada will need to implement staggering changes in order to spur a real resurrection: "You can only ride the wave of reputation for some time. To enhance the brand, you need to create desirable product that creates consumer interest." 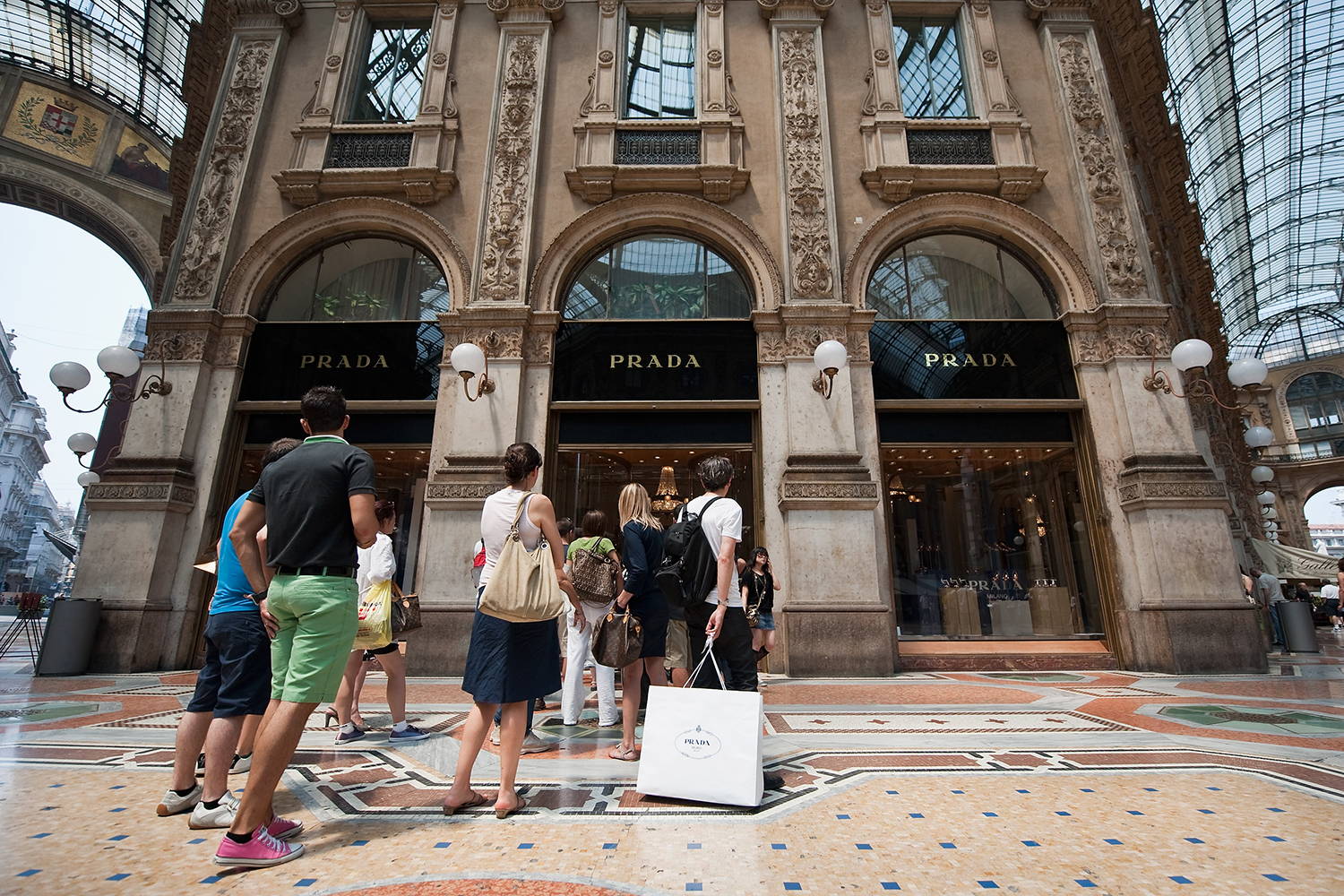 Robin Lewis, a retail analyst and FIT professor, believes Prada's slipping profits hint at the brand's overexposure. Beginning in 2012, the company has been on a mad expansion path to open 260 stores, focusing on the emerging BRICS markets of Brazil, Russia, India, China, and South Africa. It makes sense for the brand to chase potential new customers, but how can it maintain an exclusive image if it's everywhere?

"Ubiquity is the death of all luxury brands," Lewis explains. "The problem is one doesn't know they're headed toward ubiquity until they are there, and once they are there, it's over. Once the aggregate of loyal, ravenous Prada lovers decide one morning that they're seeing Prada on everybody, the brand goes cold."

"Ubiquity is the death of all luxury brands."

He adds, "All brands are really caught between a rock and a hard place. Prada has to grow, particularly because it's a public company. So they start to open more stores, but in the meantime, they are devaluing their brands. They also need scarcity to keep their brand hot and in demand."

Beyond Prada's lack of innovation and risky expansion plans, there are also larger trends to consider. As WGSN's head of market intelligence Lorna Hall explains, young consumers value casual luxury over stuffy opulence. Brands like The Row have cultivated a strong following thanks to an understated aesthetic, and Hall points to the staggering success of Mansur Gavriel as a similar example in the handbag world. Mansur's meteoric rise demonstrates just how hungry consumers are for innovative, but still elegant, accessories.

"We're seeing all luxury fashion houses struggling with this," Hall says. "Of course, big brands aren't going to go away, but they will have to address the way consumers now relate to luxury. We're looking at a different generation. There will always be consumers that want to buy into classic luxury, but the market is fragmenting as customers want to alternatively express their wealth and status through what they wear."