Share All sharing options for: ‘Empire’ Is Changing What TV Merchandise Means

Cookie became a proper noun in 2015. The lead character of Fox's ferociously successful Empire, which premiered in January of this year, has become shorthand for a take-no-shit boss lady with killer clothes and an intense, if fallible, maternal instinct. Fighting for family and power in bold Gucci dresses and colorful Moschino skirt suits, Cookie is just one (compelling) ingredient in the breakout show.

Everyone watches this show: In its first season, which wrapped mid-March, Empire ranked number two with 18-49 year olds. NBC's Sunday Night Football edged in the first spot; yes, this show is second only to effing football. In an era of niche TV, where you can cherrypick what you watch (Vimeo-exclusive web series, or the latest Real Housewives?), how you watch (DVR, streaming, or live?), and when you watch (as the series runs, or as a binge?), it's remarkable that a network show has captured audiences like this. Obviously, brands want to cash in.

A trio of interesting and varied fashion collaborations have emerged around the show, a natural extension given the role style plays on Empire. This isn't NCIS, where clothes cover characters as a means of necessity. In Empire, every scene offers a head-to-toe look, from character wardrobing to interiors and props. The fashion partnerships — with Saks Fifth Avenue, Deborah Lippmann, and Hood By Air — weave the spirit of the show into life beyond the television set (or laptop screen streaming service, let's be honest). Empire is being treated like a fashion brand.

Collaborations are different from product placement or licensing. Product placement is obvious and familiar: the box of cereal, logo facing the camera, on a sitcom countertop or the tablet crassly popping up on a crime drama. Licensing is especially common with kid's shows. Right now, there are 25 pages of Minions products on Walmart.com, from paper party plates to a hooded towel wrap. A collaboration, in its purist sense, is a project between two entities to create a new product; in this case, Empire (or Twentieth Century Fox) and a brand.

In the fashion space, we're used to seeing high-low collaborations between top designers and lower-priced retailers. H&M just unleashed its Balmain frenzy, while Uniqlo has been working with ex-Hermès designer Christophe Lemaire. We see fashion collabs with celebrities, too; Kanye West for Adidas, Kendall and Kylie Jenner for both PacSun and Topshop, Alexa Chung for AG, Drake for Nike Jordan. Television is beginning to pick up on the formula, leveraging its audience and built-in opportunity for product placement to place its own products. Scandal's costume designer, Lyn Paolo, and Kerry Washington, who plays the show's ultra-polished Olivia Pope, collaborated with The Limited on a range of clothing, which was then styled into the show as part of the promotion scheme. Like Empire, clothing on ABC's Scandal, especially for the main character, is part of every scene.

Two years ago, Saks Fifth Avenue partnered with Scandal on windows dedicated to the show's style, including Kerry Washington lookalike mannequins. The high-end department store replicated that M.O. this fall with Empire windows. In advance of the show's season two debut September 23rd (which drew 16 million viewers, beating the hell out of the nine million who tuned in for Modern Family in the same time slot), Manhattan and Beverly Hills flagship stores displayed Lyon looks in all their majesty.

"The influence Empire has had on so many aspects of popular culture proves it has the ingredients to become a stand-alone fashion brand," Jeffrey Godsick, president of Twentieth Century Fox Consumer Products, said in a press release. This partnership edges on the turf of collaboration, though the pieces shown — from Alexis Bittar (fine jewelry), Cushnie et Ochs (womenswear), Jimmy Choo (men's and women's footwear), and MCM (leather goods) — weren't exclusive to the Empire tie-in. The windows themselves were glorified "get the looks," but they served both parties well. Anyone who walked into, or past, either of these prominent storefronts from September 10th to October 7th had the link imprinted in their mind: Empire is high-fashion, and Saks is in touch with the masses, 18-49. "It brings energy and uniqueness to the shopping experience at Saks," said Marc Metrick, the store's president. 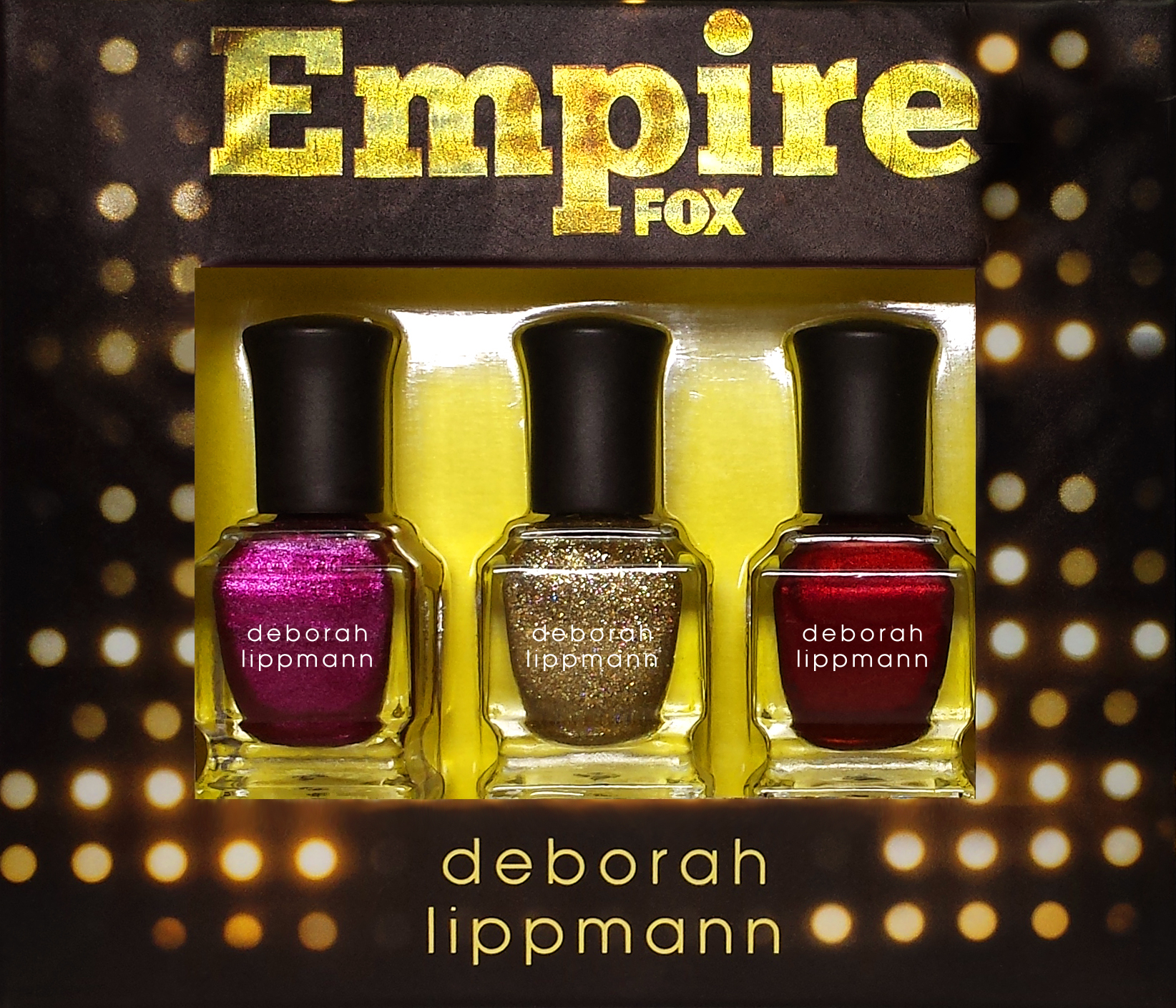 Following the Saks windows, a three piece nail polish collaboration from Deborah Lippmann was announced late October, about a month into the second season. All of the polish brand's colors are named after a song, and the Empire collab was no different. "The way music is integrated into the show is so modern and relevant; it's incredible," Deborah Lippmann (the person) told Racked.

Timed for the holiday season, the gift set is available at stores like Sephora and Nordstrom, sealing Empire in the beauty shopper's mind. Deborah Lippmann polishes sell for $18 a pop (this set, in smaller sizes, is $24), setting it in a tier above $8 Essie bottles or dollar drug store polishes. The brand has collaborated with other TV shows, HBO's Girls and True Blood. Working with a network show opens the brand up to an even wider audience. "I saw one episode and I was hooked," Lippmann told us. "I knew I had to be part of it somehow."

"Cookie’s the first thing out here in a while that feels punk," Hood by Air's Shayne Oliver told Vogue.com at the announcement of his label's collaboration with Empire. "[She's] a boss, doesn't take shit, doesn't comply with any sort of male rules," he explained. "Everyone I know was inspired by that show."

The capsule collection, titled HBA.EMPIRE and released early November, is technically the first branded merchandise for the show. Pieces range from long sleeve t-shirts screen-printed with Cookie's face and the word "mother" to pillow backpacks and clutches that reference (sorry, season one spoiler alert) Cookie's attempt to smother the life out of her ex-husband and father of her three boys, Lucious Lyon. Pricing is accessible, starting at $15 for a key chain, but not out of place compared to comparable products from the brand. The aesthetic, too, doesn't stray from Hood By Air's usual: gender-neutral, graphic-heavy, industrial goth-influenced streetwear. Like the Saks partnership, the two parties have powerful cards to exchange in this collaboration. It catapults Hood By Air, which was founded as a DIY menswear line in 2006 and has since grown to runway shows in New York and Paris, even further into mass consciousness. It gives Empire a dash of fashion cred that's different from what Saks lends. Hood By Air is from the streets up, it's underground, it's cool. And hoodbyair.com is the exclusive retailer of the merch — cha-ching.

Empire has hit the zeitgeist with catchy, original tracks and timely, if mild, political statements, right down to its forward approach to merchandising. As commercials are easier than ever to zoom through, it's crucial for television shows to seek outside sources. Empire has successfully positioned itself as a lifestyle brand viewers can buy into, whether they're a Jimmy Choo-wearing luxury customer, a manicured Sephora shopper, or a Tumblr-teen declaring Cookie "mother" via Hood By Air sweatshirt.

The ‘Mamma Mia!’ Costume Designer Explains How to Dress Like Young Donna

View all stories in Entertainment