There's no good reason to wear fur in our era of conscious consumption.

Share All sharing options for: It's 2015. Fashion Is Full of Vegans. So Why Is Fur Still Trendy?

Fur has been a constant in fashion every year for—well, forever, if you start from when it was a necessity and jump to when it was a luxury. But in recent seasons, it’s become an even hotter commodity. It’s not just what your great aunt’s prized coat from 1981 is made out of, it’s what Céline dresses are cut from—and Topshop Unique patchwork coats and little monster keychains from Fendi.

But isn't the year 2015 an odd time for fur to be such a major trend? Aren't we a bit too enlightened? Fur production often involves animal cruelty, not to mention environmentally harmful processes. Its growing presence in the luxury market just doesn't jibe with our era's emphasis on social and ecological consciousness.

Wait, what? Beyonce went for a vegan meal wearing real fur? That moment perfectly captures the mismatch of our current ideals.

Restaurants like Dirt Candy in New York and Café Gratitude in California are helping make vegetarianism and veganism easier and more appealing than ever-not to mention trendy. But at the same time, Prada created modern art-splashed fur coats for spring 2014 and Louis Vuitton is reinventing the Breton-striped tee in mink. It's enough to make you wonder if our fashionably healthy lifestyles are only out of concern for ourselves, not the animals involved. A little over a year ago, paparazzi caught Beyoncé heading to a vegan lunch with Jay-Z at Native Foods in LA wearing a fur collar. Wait, what? She went for a vegan meal wearing real fur? That moment perfectly captures the mismatch of our current ideals.

It's true that in recent years, measures have been taken to present "sustainable" and "cruelty-free" fur options. President Obama signed The Truth in Fur Labeling Act in 2010 to improve transparency, according to Marie Claire, and fashion houses like Burberry claim they don't use fur unless the farms comply with certain ethical standards. But it's hard to trust any fur seller when both brands and retailers keep getting outed for misleading labeling practices. And regardless, an animal hide ultimately has to come from an animal. It's hard to justify killing a living creature when there's a wide range of on-trend faux fur on the market.

Why is fur having an especially strong moment now? Jocelyn Gordon of Jocelyn, a contemporary fur collection sold at the likes of Revolve Clothing, Intermix and Singer 22, says that fur is more accessible than ever. It's available in a number of trends, silhouettes, colors and patterns, making it more appealing to a younger customer base.

And Rob Cahill, of North American Fur Auctions, emphasizes fur's new look. "These aren't Grandma's fur coats anymore," he says. "We've seen runway collections by Thom Browne and Emilio Pucci using an intarsia technique with fur to create very interesting visuals like never before...Gianfranco Ferré used a remarkable pattern that on the runway didn't even look like fur, but more like a chunky knit." In a time when more and more chefs are experimenting with meatless dishes, more and more designers are experimenting with new fur techniques.

Granted, designers don't necessarily use fur out of indifference to animals-sometimes, it's just the material they get. Alarmingly, it's been widely reported that furriers give designers fur to use in their collections in an attempt to boost the demand for their often-controversial goods. The New York Times revealed that Scandinavian supplier Saga Furs gave fur to Thakoon, Derek Lam, Proenza Schouler, Richard Chai and Cushnie et Ochs, among others.

NAFA works with designers who are just starting out, showing them how they can use fur. Explains Cahill: "A large portion of our budget is used to sponsor student design contests. Many different schools around the world have programs where students submit sketches and technical drawings to us. [We select 40 submissions.] Then, we provide them fur and connections to local manufacturers to help make the garments."

True, fashion is an expensive business, and designers usually need all the help they can get. Still, it should be their responsibility to look into the origins of the materials they use. This past September, Last Chance for Animals made animal abuse allegations against Burberry, Dior, Saint Laurent Paris, Giorgio Armani, Louis Vuitton, Marc Jacobs, and Diane von Furstenberg after investigating 70 rabbit farms in Spain. Then, more LCA findings released in October linked Fendi and Alice + Olivia to fur farms in China charged with systematic torture of raccoon dogs and foxes. LCA's Sharon Nuñez says, "Maybe brands don't know what's going on, but many of them don't want to know. They can pretty much assume all animals are subject to cruelty."

What about wearing vintage fur? There are so many of us who live in this middle ground: We love that fur is beautiful, stylish, and keeps us warm, but we also love animals and know how gruesome and unethical the fur industry is. What to do? The consensus among indecisive fur wearers is that if they buy vintage, they're not contributing to the ongoing cycle of fur production. Those animals were already killed, their skins already turned into coats, those coats already floating around in the world until they land in their hands. The coat exists, so why not wear it? There's some logic here: Even if you're adamantly against fur for yourself, you can probably understand why your friend is wearing her secondhand stole. But if you're really anti-fur, you might shudder at the thought of draping the pelts of animals over your shoulders.

For me, the solution is faux fur. As trendy as fur might be, faux fur is arguably having an even bigger moment. It presents the best way to stay warm (and fashionable) without the weird feelings, the moral conflict, the doubt and the judgment. "It's the twenty-first century. We can choose to be cruel or kind. With so many fashionable options out there, there's no excuse to wear the skins of animals," Ashley Byrne at PETA says. "If you want to follow the latest trends, you have so many cruelty-free options." 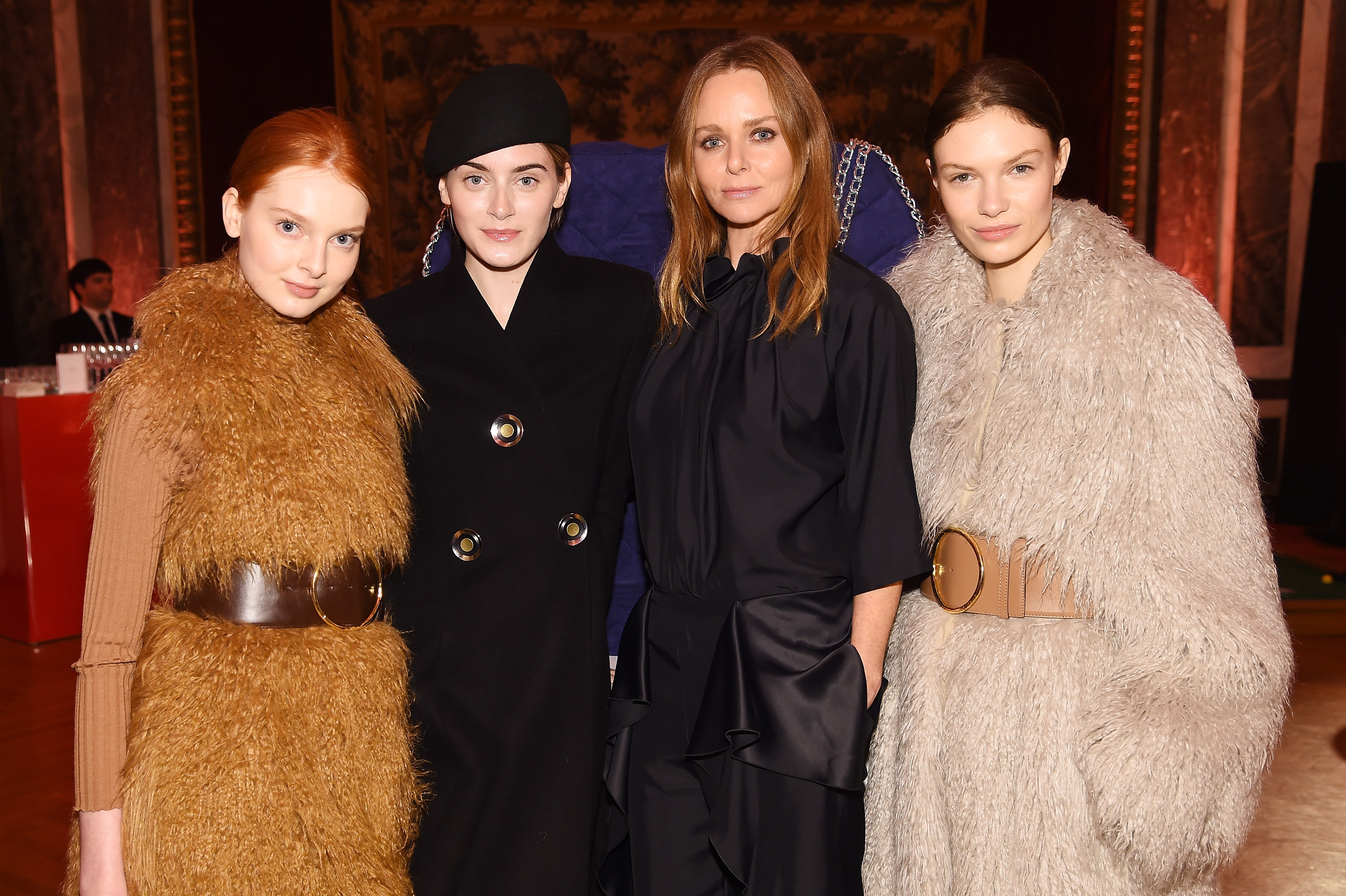 Byrne is excited about the number of faux fur and vegan choices out there for a conscious fashion fan, citing designers and stores across the price spectrum, like the Vivienne Westwood, Ralph Lauren, H&M and the all-vegan Stella McCartney. She also notes the pastel faux fur coats that Coach showed for spring 2015.

In a world where we insist on knowing the origins of our food, cleaning supplies, and beauty products, faux fur just seems simpler. You're still on trend, you've still got a statement piece on your hands. There are still questions to ask about how ethically it was produced, but at least you can be confident no innocent creatures were slaughtered to make it.

The coats at Roksanda Iincic may be dreamy, but wouldn't they look just as cool if they were made from faux fur? Look at the Humane Society's list of brands and retailers that don't use or sell fur and you'll see names like Calvin Klein, ASOS, Free People, J. Crew, Tibi, Topshop, Zara and Rebecca Taylor. Or check out PETA's "How to Wear Vegan" page for a whole guide to shopping brands and stores that don't use real fur (or leather, or angora). That way, next time you're sitting at a table at a hot vegan restaurant and your waiter is telling you which farm your kale came from, you'll be wearing an outfit that's just as ethical as your dinner.

Aging, but Make It Fashion

The Death of the Plain Preppy Sneaker

View all stories in Essays