Share All sharing options for: So You're Having a Panic Attack in a Thong Bikini on a Brazilian Beach

The closest I’ve ever come to an existential crisis was sitting ass down in a thong bikini while Rio’s ocean water washed over me. The crisis was a long-time coming, the thong was a compromise, and the waves were convenient for hiding both.

When it comes to dressing myself, I was trained well in modesty. My mom often made me wear turtlenecks, sometimes under other clothing — like when I was Jasmine for Halloween in fourth grade. She sewed together the blue, two-piece costume and then instructed that I cover up any exposed skin. It wasn’t the look I was going for. I was eight. I thought my belly button was cool.

Despite my trenchant history with turtlenecks, or maybe because of it, I’m not always a modest dresser. I’ll gleefully accept most opportunities to wear less clothing. Once, I wore a crop top to work knowing full well I was going to be photographed in a professional capacity. Then I did it again. This is the kind of behavior that inspires the very same mom, 19 years later, to call before I hop on a train home. "Please," she delicately implores. "Bring something you can wear to church." I guess I still think my belly button is cool.

But, man, let me tell you. The thought of uncovering a few more inches of ham flank on a beach in Brazil gave me a middling case of stress eczema.

The anxiety came on so strong and fast that I’m not entirely sure what sparked it. Like I said, it’s not a modesty thing. It's not body issues either. As the literal navel gazing above suggests, my body and I are on good terms. We’re pals; we do everything together. And it's definitely not other women's bodies. I’m still surprised when butt worship is met with anything other than joyful enthusiasm. Recently, though, when it comes to dressing myself for water-based activities, I’ve taken Amy Poehler’s "good for you, not for me" approach, and put on my Rachel Comey bottoms that are girdle-like and larger than some shorts I own.

So when I was in the bathing suit store with my upcoming vacation on the mind, I panicked and overcorrected, buying my first one-piece since 1999 swim team.

Now the full expenditure of beachwear that screamed DIAPER BABY AMERICAN was $250 without tax.

I sent a pic of it to my friend, Andrea, a half-Brazilian, half-New Englander, who was my reason for making the trip the first place. She was about to marry a fellow Brazilian and together they would become my bathing suit guides, whether they liked it or not or had other things to do in anticipation of lifelong matrimony.

"It’s a really hot one piece," she placated over text, "but you need to buy a bikini."

Drea sent me one picture of a woman with a truly superior body, as if delivered express from Sex Goddess Depot to someone else’s fantasy. The woman was wearing a few triangles tied together with string. She sent another picture of a woman wearing somehow tinier triangular bits. "Got it?" I got it. She sent me three more airbrushed women wearing nearly nothing like it was nothing. "And now I’m just sending you pictures of butts," she said. Not untrue.

I saw this coming. In the history of our friendship, I’d heard Drea explain that full-coverage suits just aren't available in stores there. "It ranges from thongs to tiny to small," she recently told me. "The bigger the bottoms, the more you stand out."

I usually like to stand out, and though standards for dressing can nominally change across continents, nothing really changes in intent. They are still standards. Following them or breaking them has the same effect: You’re wearing your need and ability to fit in — or not — on your sleeve. This was a vacation in a country that’s not my own; I was going to fit in. 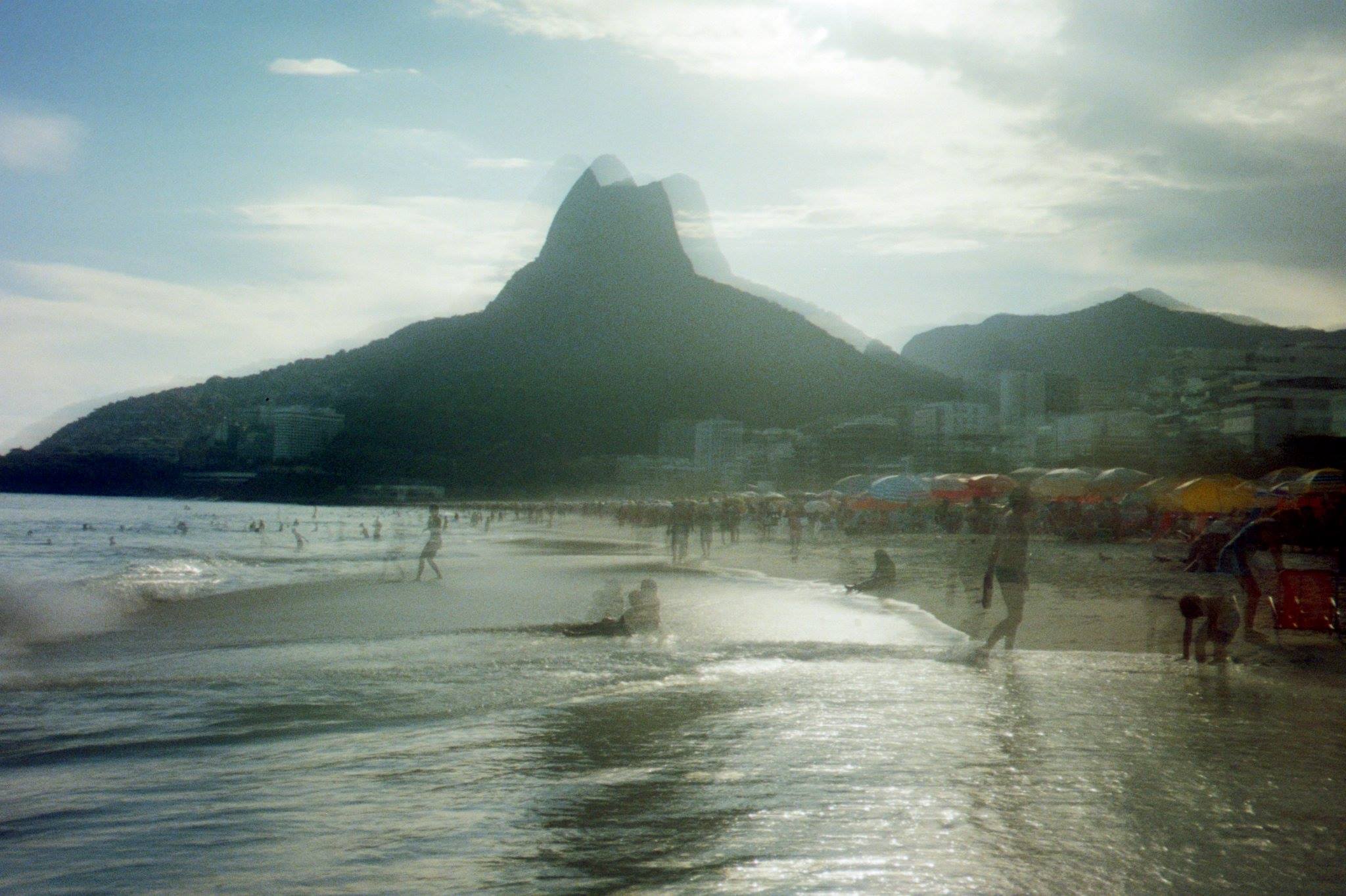 So I went shopping again, this time to Century21. I found a second bathing suit I love. The scalloped white Chloé bikini with gold hardware said "elegant" and also "full butt coverage, you dummy." I bought it anyway. It’s white! That’s sexy! If you look at it too quickly against my winter skin, it’s like I’m not wearing anything at all! I didn’t send it to Drea for approval because I knew she’d be disappointed.

Now the full expenditure of beachwear that screamed DIAPER BABY AMERICAN was $250 without tax. I hadn’t even gotten to Rio yet.

When I finally made it there, and saw that it is every bit as stunning as everyone said it would be, I wore the one-piece first. I wore it because I loved it, but it felt wrong. I didn’t feel cool; I felt weird. There was a woman — probably 70-years-old — in a smaller suit than me maybe six yards away. She looked comfortable. I looked not from around here.

The next time I was on the beach, I wore the Chloé bikini. I thought that maybe if I just self-inflicted a wedgie, it’d be passable. Nope. It was grosser and slightly more uncomfortable.

There on the beach, I was transported back to a time when I thought I could broker acceptance with a trip to the mall.

A fun thing about Rio, like many South American beaches, is that stuff comes to you. Vendors hawk caipirinhas, flaky pockets of meat, açai icies, beer, water, implements for various land sports, and bathing suits. You can buy two-pieces from men and women who carry them on circular hangers that look as if they were plucked from a Macy's department floor and then jerry-rigged on an umbrella stick. I bought a navy blue ruffled bottom that tied on the sides. It looked like a slightly smaller version of something Victoria’s Secret PINK might sell. It cost $6.

I switched bottoms on the beach as a friend held up a towel. Then I went and sat in the water, where I stayed, shaking a little, for roughly 20 minutes. "This is the longest time you’ve spent in the water on this whole vacation," my friend noted. "Is it because you’re wearing a thong?" Yes, it was because I was wearing a thong.

Phase one: Yup, those are butts.

Phase two: There is no phase two. It’s pretty much immediate acceptance.

But there I was, sitting in the water, fearing for the moment when my butt would join the legion of butts on a beach.

I wore those bikini bottoms for the next four consecutive beach days. I played many games of highly competitive paddle ball in the thong. I ducked waves in the thong and did yoga in the thong. I never forgot, however, that I was wearing the thong (thongs are not comfortable, but that’s another essay or maybe just a series of Twitter gripes). I always felt a little exposed, even while surrounded by 30 women of various shapes, sizes, and ages in similar styles at all times — not exposed physically, but in more insecure hey-you-can-tell-I’m-trying-to-be-like-you kind of way.

The best way to describe the feeling is "middle school." Like, when I wore Lilly Pulitzer dress to the eighth grade dance, despite my usual T-shirt and jeans. Or when I dipped into my savings for the first time ever to buy Birkenstocks and Sevens, inexplicably the two popular items that year. There on the beach, I was transported back to a time when I thought I could broker acceptance with a trip to the mall. Only this time, the same scheme was literally laid bare, a million feelings converging on a hunk of skin that had never seen the light of day. My very pale, dumb panic.

Just like middle school, though, when you're no longer in the shit, you realize nobody ever really cared. Even if anyone did worry about your jeans or shoes or thong bikini for a second (which, to repeat, they did not), those people worried about themselves approximately one million times more. Dress like the others, or don't. Nobody cares. Nobody cares! I still have the thong, and summer is almost here. Maybe I'll wear it back in the US, with — I don't know — a rash guard. Maybe a turtleneck rash guard. Either way, nobody will care and I will keep it together this time, probably.