Share All sharing options for: How to Talk About Your Minimalist Wardrobe Without Sounding Like a Douchebag

If we took a trip to Cos or Creatures of Comfort right now, or to some other place where I would be wildly attracted to the clothing selection, there is a 98 percent chance that I'd walk out empty-handed.

My wardrobe, as a result, is pretty limited. I've got about five shirts, three pairs of pants, and one pair of sneakers on rotation for the work week. Every item doubles as weekend wear, give or take a few t-shirts and a pair of jorts. According to the standards set by the fashionable powers that be, I am killing it.

If you've read Kinfolk or New York or even the New York Times, you're probably aware that over the last few years, interest has congealed around the idea of unearthing our best selves by shedding our useless, unsatisfying crap and keeping only the crap we love and need. The "essentials."

There are four million articles on the internet titled Why I Wear the Same Thing to Work Every Day and Powerful Women and Their 'Uniforms': What I've Learned, and another eight billion dealing with Marie Kondo's 2014 decluttering opus, The Life-Changing Magic of Tidying Up. At a time when chains like H&M and Zara are chomping up real estate to spread the gospel of affordable and ever-changing product assortments, an ascetic attitude toward worldly possessions has grown rather poignant, and very trendy. (Though let's be clear: curbing your spending in the pursuit of cleaner aesthetics and a clearer mind is a high class problem.) 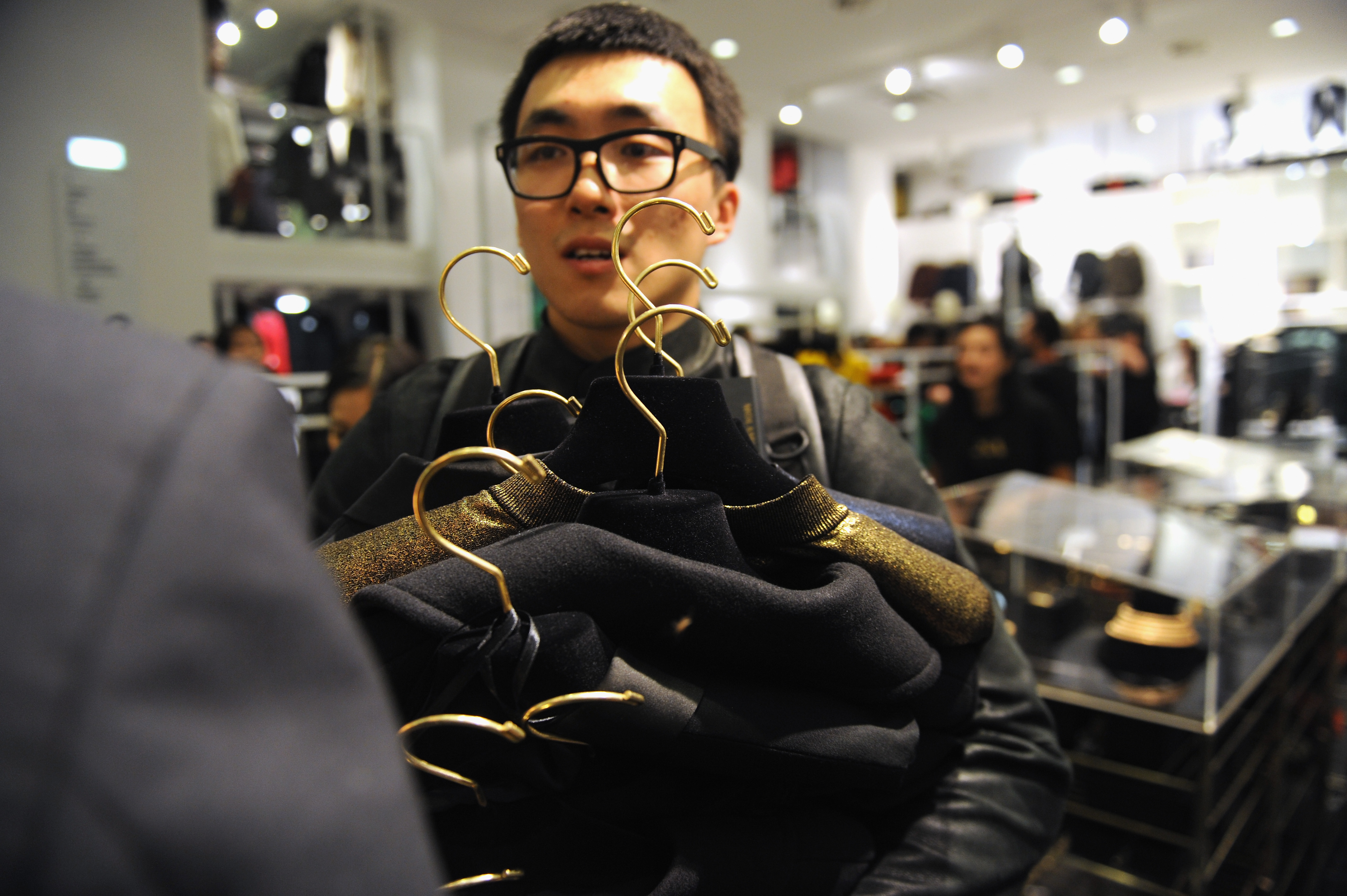 Because I've never been an avid shopper, this minimalist movement has provided a pleasant, unexpected, and totally undeserved ego boost.

In part, I don't buy a lot of clothes because I've never gotten over my mother non-rhetorically asking me on every shopping trip: "Do you love it? Do you really love it?"

Beyond that, I deny that anyone actually enjoys spending half an hour wriggling in and out of too-tight denim in a Madewell changing room, as though performing some masochistic Dance of Death. When I find myself in want of new jeans, I spend about point three seconds weighing how much I actually need them against how much I do not want to confront a fitting room. Then I amble over to McNally Jackson, buy a scone and look at magazines.

This is why I continue to wear pants riddled with inner thigh holes. You can swaddle your minimalist clothing manifesto in self-deprecation, but it's no less annoying than the swaggering way I started this story.This is also why I wear so many long shirts from Everlane.

But there's the problem! As I wrote those last few sentences, they started to form the basis for a grade A 2016 humblebrag. "Oh, I hate shopping. Oh, this old thing?" You can swaddle your minimalist clothing manifesto in self-deprecation, but it's no less annoying than the swaggering way I started this story.

If you're going to talk about your pared-down wardrobe, or your love of buying fewer things (really great quality, though), you're going to sound like a douchebag. I'm with you, but truly, you will. I've written about it before, and in retrospect, I sounded like an asshole.

When so many forces in the fashion landscape teach us to fill our closets with more, more frequently, a painstakingly slim wardrobe is never just five white shirts and three pairs of black trousers. It's a reaction against the wider culture. And that's not a bad thing. But waxing rhapsodic about your essentials-only shopping game tends to sound like a condemnation of anyone still in the grasps of Asos's fantastic shipping policy, and that's a lot of people.

For instance, my best friend. We live together, so we show each other every new thing we purchase. I'm going to guess that she buys things at least 10 times more often than I do. I like to think that I've turned my condescension toward her shopping habits into a funny bit:

Elena: Look at this Venus de Milo t-shirt dress I bought! [Holds it up enthusiastically]

But this is not a funny bit. This is me being a dirtbag to someone I love about the things she loves. For the purposes of this story, and because our friendship can take it, I asked Elena to describe my superciliousness in the most brutal language she could muster. Here's what she had to say:

"I guess what I find most annoying about it is that my experience is normal. It's sometimes treated as, 'Oh, how consumerist of you.' That's what the whole world is! I'm a product of my environment, and it's like you're an alien creature who has adopted other habits and treats them as if they're the norm."

(Obviously, I find this very flattering.)

"Your self righteousness is merited, in a way. Like I respect it, but that's what's frustrating: I respect you, so stop making me feel bad about myself!"

That's all I'm trying to say here. If you, like me, love your wee little clothing supply, don't buy up the discount rack at Topshop just to appease your friends and irritable coworkers, and don't stop sending them articles on Facebook about environmental degradation, or the debatable ethics behind Beyoncé's activewear collection.

But perhaps give thought to how you talk about your own shopping style and how often you roll your eyes at your friends when they discuss theirs. I have a few suggestions on this front:

I've observed my mother do this. She doesn't buy that much stuff, but when she does, she's really pleased with it. She got a new winter coat a few years ago, and I'm still hearing about it. Genuine excitement is the most charming way to convey that central tenet of a life without a lot of clothing: only buying things you really value.

2. Carry duct tape with you at all times.

Place a strip over your mouth any time you feel the urge to explain why life is so much better now that your closet only has ten items inside.

3. Talk about your wardrobe just as you always have...

But maybe mention something about your Seamless addiction, or your afternoon scone and cold brew problem, or the fact that about 50 percent of your income goes toward paying your rent, even though you read an article on Man Repeller that said you should cap that part of your budget at 30 percent (i.e, admit your consumer tendencies where they exist — because face it, they exist).

4. Talk about your wardrobe just as you always have...

But prepare to be exiled to the edge of the New England woods like that Puritan family in The Witch, because the townspeople do not want to hear it anymore.

5. If someone else wants to talk about their shopping adventures, indulge them.

To quote Elena: "Not indulging them makes you sound like a dick."

Nobody wants that. Least of all you or me. Besides, you never know when you're going to be on the receiving end of that judgmental "Mm hm."

Out of a stark, neutral-hued Instagram landscape, the glittering, embroidered exuberance of Alessandro Michele's Gucci has positively flourished, because for many fashionable types, the pendulum had to swing the other way at some point. Tell me you don't sometimes hear the siren call of more, too.

Next Up In Shopping