It's Time to Pull the Baseball Uniform Into the 21st Century

Rebuilding the jersey from the ground up actually makes sense for athletes.

Share All sharing options for: It's Time to Pull the Baseball Uniform Into the 21st Century

Major League Baseball was established in 1869. That predates the invention of the lightbulb by a decade, and the earliest ball players would have to wait another 16 years before taking a car to the park was even a possibility. The world has changed since 1869, but one of the few things that’s remained the same is the baseball uniform. And it's not like the league doesn't have to money to upgrade their looks — these guys are getting paid up to $29 million a year. Yet they’re still trotting out in trousers and button-up shirts more formal and seemingly less functional than what the modern American now wears to the office.

It doesn’t make any sense, so I spoke with sportswear designers and sports scientists to find out what the baseball uniform would look like if we were to rebuild it from the ground up.

The first thing I was told? It will never happen. Baseball is way too traditional, and players grew up watching their heroes in these uniforms. Irving Perez, a student at University of Oregon’s sports design program who worked on a project rethinking the baseball uniform, spoke with players and found “they don't really care for a change as of now,” he tells me. “They grew up knowing that this is what it is to be playing baseball.”

Get the Racked newsletter for even more great stories, every day
Sign Up

The uniforms, currently made by Majestic, have changed since the mid-1800s, but barely. The biggest differences are in the materials: They’re stretchier and more breathable, but even the fabrics leave designers wanting more.

“It's not actually that we are biologically, the human race, getting better at anything, it's just that we have better equipment to help us do that.”

Soudi Masouleh, a sportswear designer who’s worked with Nike and Asics, is based in Britain, but even she knows America’s pastime is way too traditional to ever dramatically change the uniform. She thinks there’s a lot that can be done with its materials alone, though. According to Masouleh, advancements in sportswear are the reason human performance keeps peaking. Everyone may seem faster and stronger, but “it's not actually that we are biologically, the human race, getting better at anything, it's just that we have better equipment to help us do that,” Masouleh tells me. Perhaps we’re depriving ourselves of baseball’s next golden era by keeping the uniforms static.

“The first thing we normally do as sportswear designers is study the actual sport and the movements of the athlete and the environment that they compete in or play in,” Masouleh says. Working from here and just looking at the materials, Masouleh observes that with a summer sport like baseball, new fabrics can provide UV protection, compression, and even collars with a gel inside that can keep the neck cool — a trick used by long-distance runners to thermoregulate the body. The team at the NY Sports Science Lab I speak to wonders why there can’t be undergarments with a “3D biomechanical analysis component.”

Michael Greene, the lab’s head performance-enhancement specialist, speaks excitedly about how this would unlock the ability to analyze every movement of a player, from his swing to how much he’s affected by fatigue toward the end of the game. These are all half-measures, though. When I really press him for details about what a baseball uniform could look like if we treated tradition the way the MLB treated the Montreal Expos, all the responses grouped around one concept. 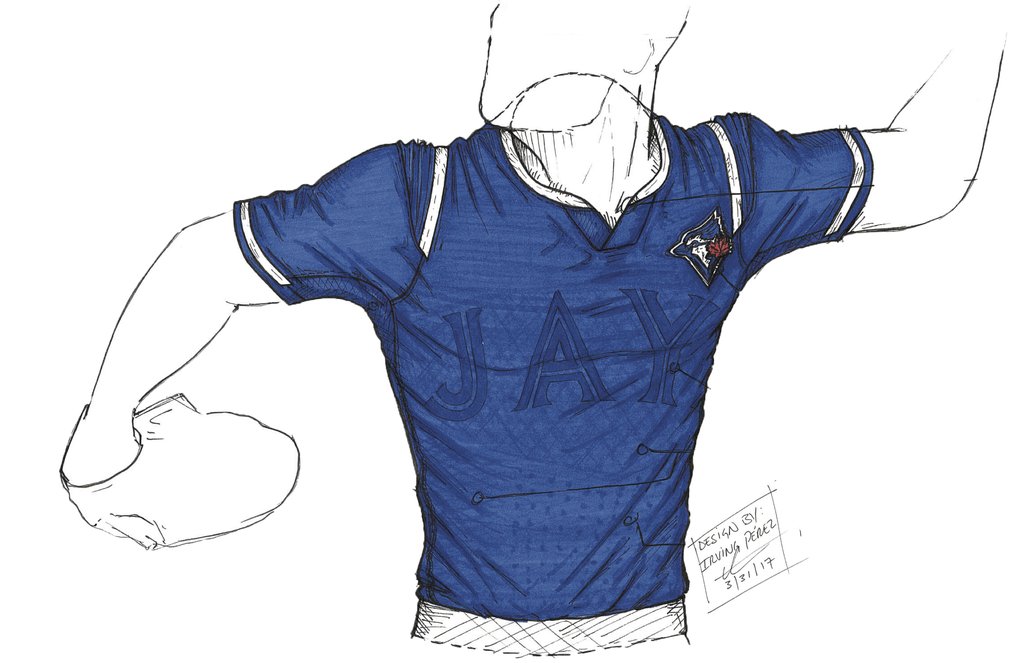 The experts thought less about rebuilding something completely new and more about borrowing what works in other sports. Rugby is the game that kept coming up. Rugby and baseball players have similar body types, according to Perez, and that sport is willing to experiment with more creative ideas. Masouleh talks about engineering rugby jerseys with absorbent patches of fabric so players can easily wipe dirt and sweat off their hands. Pitchers trying to pinpoint balls thrown over 90 miles per hour could benefit greatly from an addition like this.

Susan Sokolowski, the director and associate professor of the sports product design graduate program at the University of Oregon, compares baseball to shotput. “A shotputter wears a tank top,” she says. “So full mobility, no sleeves, no double layers, a base layer, and a jersey.” You can look toward soccer for a solution for all the diving and sliding. Masouleh suggests compression socks. Sokolowski explains that the construction of the baseball uniform, unlike what’s worn by players in other major sports, is still made by a sewing process where pieces of fabrics are put together. Other uniforms, like those for soccer and football, are made out of what Sokolowski calls an “engineered textile.” This allows for fewer separate pieces of fabric and better performance. It can also eliminate extra layers, like the slider shorts baseball players wear to skid across the ground.

Perez’s mocked-up uniform focuses a lot on the torso, neck, and waist of the player. His version allows for better movement in the shoulders, for throwing, and around the body, for swinging the bat. It also gets granular, taking into consideration how to best apply a logo to keep weight down.

“They still wear belts,” Perez says, and I half-expect him to shout out for Christ’s sake. “To me, that's very, very old school.”

What seems to irk these designers the most is the archaic pieces that have hung on for the ride over a century and a half. “They still wear belts,” Perez says, and I half-expect him to shout out for Christ’s sake. “To me, that's very, very old school.” Perez says that the belt is just another layer on a player’s body that can restrict running and body movement in the swing. “It's one of those things where you just don't understand why it's still in the space,” he says. Sokolowski adds that every other sport outside golf has adopted an elastic waistband with a drawcord.

And because the uniform has become largely decorative at this point, most players have to wear their activewear underneath all that polyester. “Gosh, it's really hot during baseball seasons in the summer,” Sokolowski says. “Why would you wear two layers of apparel? People are kind of suffering but don't even really acknowledge it."

Part of this comes down to the MLB’s current manufacturer of uniforms. Majestic is a Pennsylvania-based company that prides itself on making its products in the USA and has been exclusively outfitting MLB players for games since 2004. Before Majestic, companies like Rawlings and Russell provided uniforms. Sokolowski describes these companies as “smaller American brands that didn't have the resources and the ability to spend a lot of money on [research and development] and materials.”

That’ll change in 2020, when Under Armour officially takes over as the official provider of MLB uniforms. Under Armour is known for its innovation, and the team of sports scientists believe Under Armour will come in with “new technology, new fabrics, and make it possible to move in a more efficient manner,” says the lab’s sports and conditioning coach, Anthony Flask, who’s also a former strength and conditioning coach with the Milwaukee Brewers.

Under Armour declined to talk about what its uniforms will look like come 2020, and did not respond to requests for comment. However, looking at the baseball jerseys Under Armour currently offers — the brand outfits 42 Division I schools as of last October, according to The Baltimore Sun — there is technology fused in there. Fabric equipped with “moisture transport and soil release technology,” similar to what Masouleh envisioned; a mesh back to reduce weight while increasing breathability; and jerseys that eschew buttons and come in a V-neck, like Perez’s.

Under Armour will hopefully take its MLB uniforms to the next level to enhance performance potential. Flask repeatedly mentions to me that the current uniforms don’t restrict movement, but when I ask if they’re enhancing performance the way we see jerseys do in other sports, he says baseball hasn’t been able to keep up. What is apparent after talking to the experts, though, is that baseball fans are giving up better performances and players are suffering all in the name of style. That’s actually a concept I can get behind, tbh.